The Ghouls (グール, Gūru) are horned, stone imp-like Phantoms that are only strong in high numbers. They serve as the grunts of the more powerful Phantoms. Ghouls are created from magical stones that resemble pieces of themselves, and while not as strong as Phantoms produced from Gates, they can withstand gunfire.

They can convert their arms into a gun-like weapon that can shoot hellfire, or wield various polearms.

Through a temporary alliance with the Phantoms, Ghouls were among the Monster Army assembled by the Akumaizers. Ultimately, this army was wiped out by a gathering of eight Heisei Riders. Kamen Rider × Kamen Rider Wizard & Fourze: Movie War Ultimatum

After murdering Wiseman and taking the Philosopher's Stone for himself, the evolved Gremlin unleashed the Ghouls for the last time as he wreaked havoc while gathering mana, attacking humans indiscriminately. Though the police forces arrived on the scene to halt the Ghouls' assault on the civilian populace, their firearms proved ineffective. With Haruto Soma left emotionally broken following the death of Koyomi, the Ghouls were opposed by Kosuke Nitoh, despite the destruction of his Beast Driver, along with Rinko Daimon as Shunpei helped evacuate the civilians. Ultimately, the three were outmatched and surrounded, but were saved by Mayu Inamori, Yuzuru Iijima and Masahiro Yamamoto who, retaining the arsenals Fueki granted them, transformed into the Kamen Rider Mage trio, proceeding to destroy the last of the Ghouls. The Last Hope

Kosuke Nitoh was taken by the Magic Stone to Amadum's world after destroying a pack of Ghouls as Beast Hyper. The Kamen Rider Rings

Ghouls appear as Common Enemies in all installments in the Battride War video game series.

The Stones used to create Ghouls 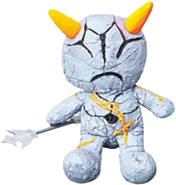 The Ghouls were designed by Hiroshi Maruyama, who designed all of the Phantoms in Kamen Rider Wizard.

Retrieved from "https://kamenrider.fandom.com/wiki/Ghouls?oldid=510974"
Community content is available under CC-BY-SA unless otherwise noted.