GhostArmor (ゴーストアーマー, GōsutoĀmā) is a Kamen Rider Ghost-based form accessed using the Ghost Ridewatch, invoking Kamen Rider Ghost's Ore Damashii. When summoned, it is projected in a holographic Eyecon and does Ghost's signature pose before dispersing to attach to the user. The GhostArmor's Eyecon Shoulders (眼魂ショルダー, Aikon Shorudā) are modeled after Ghost Eyecons, and depending on whether it is used by Zi-O or Geiz, its visor spells out "Ghost" (ゴースト, Gōsuto) in katakana or "Ghost" (ごーすと, Gōsuto) in hiragana respectively. Once equipped, the user gains some of Ghost's powers including floating, intangibility and the ability to summon Parka Ghosts.[1]

The Ghost Ridewatch was originally possessed by Ohma Zi-O in the year 2068. It was, however, stolen alongside the Drive Ridewatch by Geiz Myokoin. Ghost Hunter 2018

Traveling to early September 2018, Kamen Rider Geiz assumed the GhostArmor as he attacked Sougo Tokiwa, who himself had transformed into Kamen Rider Zi-O. Through his Eyecon Shoulders, Geiz summoned the Parka Ghosts of Ore, Miyamoto Musashi, Isaac Newton and Thomas Edison to assist him. Kingdom 2068

On December 8th 2018, Geiz used the Ghost Ridewatch in the Zikan Zax to perform a Zakkuri Cutting to temporarily defeat Another Ghost before he was revived by Time Jacker Heure. Later, Geiz lent the Ghost Ridewatch to Zi-O so he could appropriately fight Another Ghost, with Zi-O swapping his GaimArmor for the GhostArmor while Geiz continued in WizardArmor. Zi-O and Geiz quickly overwhelmed Another Ghost but were stopped just short of performing their respective finishers when Heure revealed that defeating the Another Rider would kill him. In this moment of hesitation, the two Riders were assaulted by the Flame Saber of Kamen Rider Decade: Agito Ground Form. With Geiz disarmed, Decade switched to the form of Kamen Rider Hibiki and proceeded to perform his Ongekibou Final Attack Ride to defeat Zi-O. Ghost Hunter 2018

Facing Another Kikai, a persistent Another Rider who had no host, Geiz assumed GhostArmor to fight him, being joined by Kamen Rider Woz Futurering Shinobi. Though they unleashed their respective finishers, Geiz and Woz failed to defeat Another Kikai before Sougo arrived, at which point Swartz appeared and forcibly applied the form of Another Kikai to Heure, who proceeded to make his escape. It's Kikai! 2121

While fighting Another Zi-O's assembled Another Riders with Zi-O, Geiz used GhostArmor's Omega Time Burst to defeat the third Another Ghost, freeing its human host. Our Goal 2019

This Ridewatch allows the original Ghost to see ghostly entities when he holds it. GO! GO! Ghost 2015 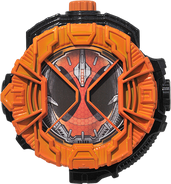 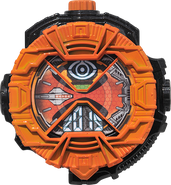