After the Genm Ridewatch was dropped by King Kuroto Dan, Geiz tried to use GenmArmor in 2016 to stop Dan's first attack as Another OOO. Despite destroying him with a Critical Time Burst, this was unsuccessful in eradicating Another OOO as Dan had made the contract in 2010 and the year marked on his back only appeared to read "2016" due to a crack, as well as Genm not being the same power as that of OOO. Genm Master 2016 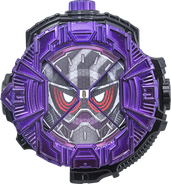 Genm Ridewatch (Inactive)
Add a photo to this gallery

Retrieved from "https://kamenrider.fandom.com/wiki/GenmArmor?oldid=602838"
Community content is available under CC-BY-SA unless otherwise noted.