Masaki Tsukada
Gel-Shocker Annihilated! The End of the Leader!! (ゲルショッカー全滅！首領の最後！！, Gerushokkā Zenmetsu! Shuryō no Saigo!!) is the ninety-eighth and final episode of the original Kamen Rider series. While not initially intended to be the end of the show, it ended up as such when the introduction of the third Kamen Rider, occuring over the next two episodes, evolved into a second Kamen Rider show as episodes 99 and 100 became the first two episodes of Kamen Rider V3. [1]

Trying to rescue his friends from Gel-Shocker, Takeshi raid in and tried to transform but frozen by Hiruchameleon. As one of them about to be modified into a Gel-Shocker Monster, Kamen Rider 2 returns and defeats the Gel-Shocker troops, rescuing the Rider Squad members and Hongo himself. They proceed to capture Hiruchameleon and ask him about General Black's location, but he refuses to speak. General Black's voice through the speakers tells them to bring Hiruchamelon to him and so the Double Riders follow their only lead, taking Hiruchameleon to the arranged place, only to see themselves surrounded by revived Gel-Shocker monsters. General Black's voice comes from Hiruchameleon himself, who leads them to that trap and reveals itself to be General Black himself. However, to his surprise, the two Riders were already expecting that. Hongo and Hayato go after General Black, while Taki tells them that he'll handle the monsters, which escape in a truck. Hiruchameleon can't keep up with the Riders, and attempts to escape by using his invisibility. However, Rider 1 and 2 sense his presence and hit him with a double chop, which finishes off the Gel-Shocker commander. Taki catches up with the monsters, just to be captured. Using a digital voice mimicking Taki's, the Great Leader sends Rider 1 and 2 towards Gel-Shocker's headquarters. They're surrounded by the Gel-Shocker monster troops, but managed to destroy all of them once again. Afterwards, the Rider Squad members are used by the Great Leader as hostages, and the Riders run through a minefield to reach them. The Riders seemingly fall, only to surprise the Great Leader by appearing in his command room. The Great Leader was covered by a mantle, and Rider 2 grabs it, only to reveal a head full of snakes. Promising to send them to hell for destroying Gel-Shocker, the Riders are hit by powerful waves of energy, but managed to run through them and grab the Great Leader's head, and pulling the snakes of his head, only to reveal a plaid featureless cyclops underneath. The Great Leader tells them that this is the end of Gel-Shocker, and they'll all die together, before falling on the ground just as the explosions start. Hayato notices the Great Leader's supposedly real form fallen on the ground, and attempts to approach it, but when they're about to do that the explosions just increase and the entire underground headquarters, and even the lake above it, explode.

With Gel-Shocker destroyed, Taki's mission is complete, and he returns to the USA. Hongo and the others watch his plane's departure, believing for a moment that peace has returned and the days of fighting finally have ended. 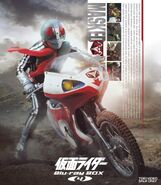