Geddon (ゲドン, Gedon) is the evil organization based in the Amazon before moving to Japan, bent on world dominion and fueled by human blood.

The Geddon organization was formed in the jungles of the Amazon, coming to Japan to pursue Amazon as they need the Gigi Bracelet to enable its leader Gorgos to rule the world.

In an alternate timeline caused by Ankh leaving a O-Medal behind in the year 1971, Shocker achieved its goal of dominion of Japan with the Shocker Greeed. Geddon, represented by Llumu Qhimil, was among the various organizations that forms a partnership with Shocker. OOO, Den-O, All Riders: Let's Go Kamen Riders

Geddon also exists in the A.R. World of Amazon, where it is fought by an alternate Kamen Rider Amazon. By the time the Hikari Studio arrived in this world, it was taken over by Dai-Shocker, with the leader of Geddon, Ten-Faced Demon Llumu Qhimil, serving as Dai-Shocker's designated ruler of the World of Amazon, developing the mindset that Kamen Riders are the enemies of the human race, rather than Geddon. He has the GaGa Armlet and seeks Amazon's GiGi Armlet to gain their full power and use the unlimited ancient Inca powers to complete his master plan of converting humans into monsters. Though he gains the GiGi Armlet, he loses both it and the GaGa Armlet to the Kamen Riders with Decade Complete Form weakening him with Faiz Blaster Form before Amazon destroys him with the Super Wild Slash. Amazon, Friend The Strong, Naked, Strong Guy 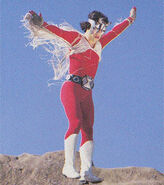 Akajusha
Add a photo to this gallery

Geddon's Beastmen (獣人, Jūjin) are based on animals, insects, and arachnids. Geddon creates its Beastmen by abducting people and taking them to the Beastmen modification room. There they are transformed into Beastmen by going through cybernetic surgery using incan science and magic. Gorgos can also create Beastmen using the power of the Gaga bracelet. Among the Beastmen are: 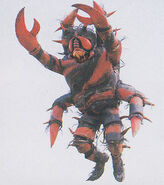 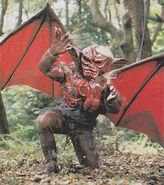 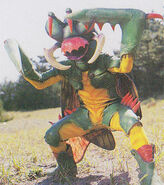 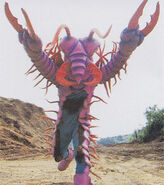 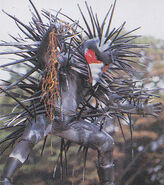 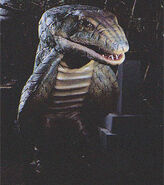 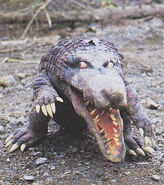 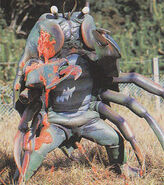 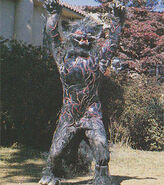 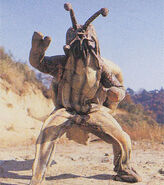 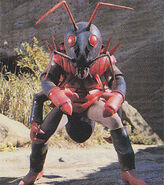 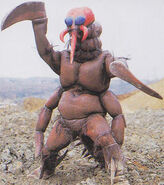 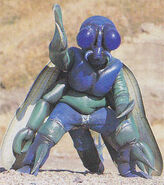 Dobsonfly Beastman Advanced
Add a photo to this gallery

Vigilantes
Add a photo to this gallery

Dai-Shocker members in the World of Amazon

Several kaijin members of Dai-Shocker appear in the World of Amazon.

Yobuko
Add a photo to this gallery

Geddon served as the evil organization in the first 14 episodes of Kamen Rider Amazon.

Retrieved from "https://kamenrider.fandom.com/wiki/Geddon?oldid=548003"
Community content is available under CC-BY-SA unless otherwise noted.