The Gashat Gear Dual β can summon the Gamer for either Taddle Fantasy or Bang Bang Simulations without the user needing to transform first, and the Gamer can be directed to attack the user's opponent directly. 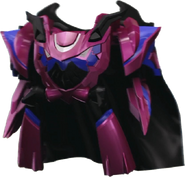 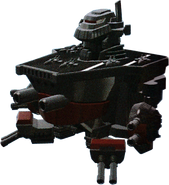 Used in a Gamer Driver, it can be used to assume one of two Rider forms, one for each game: Taddle Fantasy accesses Brave Fantasy Gamer Level 50, and Bang Bang Simulations accesses Snipe Simulation Gamer Level 50.

Kuroto was seen working on this Gashat with data from the recently stolen Taddle Quest Gashat, using its data to help create Taddle Fantasy. [A Nonstandard BURGSTER?]

After stealing the Bang Bang Shooting Gashat, Kuroto was able to copy and update its data to complete Bang Bang Simulations and the Gashat Gear Dual β. He later used it to summon the Fantasy Gamer directly to attack Ex-Aid Double Action Gamer Level X, knocking him out of his transformation in one hit, in an attempt to take back the Mighty Brothers XX Gashat. [The Truth Exposed]

Between Brave and Snipe

Later, Genm Zombie Gamer Level X again summoned the Fantasy Gamer while fighting Ex-Aid, attempting to take the Mighty Action X Gashat. Hiiro Kagami grabbed the Mighty Action X Gashat from Ex-Aid and used it to lure the Fantasy Gamer into a Confusion Energy Item, causing it to ram into Genm, which caused him to drop the Gashat Gear Dual β. Hiiro stole the Gashat Gear Dual β and used it to transform into Kamen Rider Brave Fantasy Gamer Level 50, and defeated Genm and the Gatton Bugster. After canceling his transformation, he started to feel pain in his chest, mostly because he leveled up to a form greater than Level 5. [A Sudden Fantasy!?]

Hiiro assumed Fantasy Gamer Level 50 when he fought Vernier Bugster. After the Bugsters transformed back into the patient it infected, Brave fought Para-DX. He was doing fine until his chest pains happened again, resulting in him cancelling his transformation and collapsing. As a result, Taiga took the Gashat Gear Dual β from Hiiro. Taiga then summons the Simulation Gamer for the first time transforming into Snipe Simulation Gamer Level 50 and successfully destroyed Vernier Bugster. [Take Off Against the Direction of the Wind!]

When Kuroto Dan's plot to revive in the Game World caused an army of Bugsters to perpetually revive and emerge into the real world, Brave and Snipe shared the Gashat Gear Dual β as they fought back the endless horde while Emu was sent from CR to the Game World to stop Dan. Brave assumed his Fantasy Gamer first before being beaten back, [Maze 2: Escape] leaving Snipe to endure alone with the Simulation Gamer before rejoining him with the Hunter Gamer, at which point the horde ultimately dissipated in an instance as the destruction of the Game World brought about by Kazuma Kenzaki thwarted Dan's ambition to revive. [Maze 3: Gorider Forever]

Stepping in alongside Ex-Aid and Brave to defend the Ride-Players against the Bugsters, Snipe assumed the Simulation Gamer with which he performed the Bang Bang Critical Fire to destroy Aranbura. [Players Who Bet on Survival]

Reconciling with Nico, Taiga cured her second infection by assuming the Simulation Gamer with which he performed the Bang Bang Critical Fire against Vernier, swiftly destroying the Bugster while earning the affection of the Lovrica Bugster's Lovely Girls. [Love & Peace for the Winner!]

Faced with Para-DX's new Level 99 Perfect Knock Out Gamer, Snipe and Brave both used the Gashat Gear Dual β in quick succession, respectively assuming the Simulation Gamer and Fantasy Gamer to engage him only to be easily outmatched before being defeated as their Bang Bang Critical Fire and Taddle Critical Slash were overcome by the Gashacon Parabragun Gun Mode's Perfect Critical Finish and Ax Mode's Knock Out Critical Finish. [We're Me!?]

After Kuroto's revival as a Bugster, he creates a second Gashat Gear Dual β, allowing Brave and Snipe to use their Level 50 forms at the same time. [The Forbidden Continue!?]

When the Kamen Riders stepped in to save a Ride-Player from the high tier Bugsters, Brave Fantasy Gamer and Snipe Simulation Gamer were respectively pitted against Lovelica and Level 99 Graphite and found themselves outmatched, forcing Ex-Aid Maximum Gamer to led a retreat. Entering a rematch in what was intended to be the final battle against the high tier Bugsters, Snipe was able to hold off Graphite enough for Ex-Aid to eliminate Lovelica's edge by destroying the Lovely Girls, allowing Brave to overcome him. Ultimately, however, all parties were effortlessly defeated in an instant when the time-manipulating Kamen Rider Cronus made his appearance. [Judgment Received!]