The Garanda Empire (ガランダー帝国, Garandā Teikoku) makes its appearance prior to Gorgos' death, taking the Gaga Armlet for their own use as they go on a campaign of terrorist attacks on Tokyo to make it into their seat of power before going after the rest of the world. Led by the mysterious "Ruler" and stationed underground in trap-filled base, the Garanda Empire also uses Beastmen as their kaijin.

Zero the Great is the title of those who inherited three sacred treasures of the Garanda Empire's ruling Zero House (ゼロ家, Zero-ka): the Helmet of Flaming Wings (火の翼のかぶと, Hi no Tsubasa no Kabuto), the Blood Cloak (血のマント, Chi no Manto), and the spear Blue Thunder (青い雷, Aoi Kaminari). The last Zero the Great was said to have been born in 1938, and aged 37 when he was slain in 1975.

The legendary ruler of the Garanda Empire, Zero the Great asserts his claim of descent from the ruling dynasty of the ancient Parthian Empire. He wears a helmet with a flaming decoration while his body is guarded by steel armor. A very cruel man, Zero does not hesitate to execute unsuccessful Beastmen and Kurojusha with a sparkling high voltage beam from the Blue Lightning spear.[1]

After the destruction of Geddon, the organization's leader Emperor Zero stole the Gaga Bracelet after the Jyumenki's destruction and targeted Kamen Rider Amazon's Gigi Armlet. 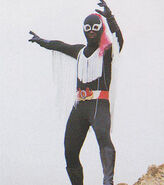 Kurojusha
Add a photo to this gallery

Just like Geddon, the Garanda Empire's Beastmen (獣人, Jūjin) are also based on animals, insects, and arachnids. Among the Beastmen are: 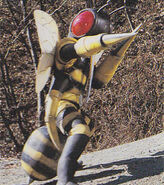 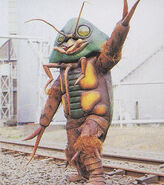 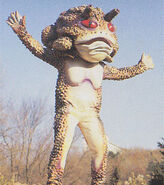 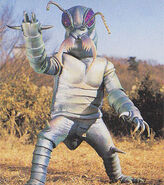 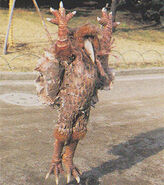 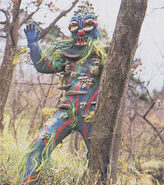 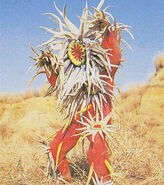 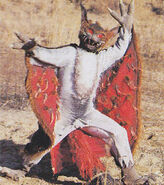 Imitation Amazon
Add a photo to this gallery

The Garanda Greeed (ガランダーグリード, Garandā Gurīdo) is a Greeed very similar to the Emperor Zero which was created from the Garanda Medal by Shocker. He was destroyed by Kamen Rider OOO, but his Medal were later used for the transformation of the Boss. Kamen Rider OOO: OOZ

The Garanda Empire served as the evil organization in the final 10 episodes of Kamen Rider Amazon.

Retrieved from "https://kamenrider.fandom.com/wiki/Garanda_Empire?oldid=670117"
Community content is available under CC-BY-SA unless otherwise noted.