The Ganbarider system is created by Ganbarizing Corp. (ガンバライジング部, Ganbaraijingubu), a Kamen Rider researching organization. They found a horrible enemy will threaten the Earth's peace in the future. In order to fight against this threat, they created an Avatar Rider with limitless possibilities. They also found people who are able to use this system, with strong will and able to fight against these dark forces.

As one of the customizable Riders in Ganbarizing, his appearance is decided by the player. His unique feature is his screen monitor mask which he can change to utilize various abilities. Furthermore, he can use almost every Rider's weapon and skills in the series, such as the Trigger Magnum, Medajalibur, WizarSwordGun, Daidaimaru, etc. by utilizing what is known as Ride Learning (ライドラーニング, Raido Rāningu).

In one of the Ganbarizing trailers, he is chasing another Ganbarider while helping Kamen Rider Wizard to fight Medusa and the group of Ghouls. After both Riders defeat the Phantoms, he uses his Ganbaride Driver to teleport and assist Kamen Rider Gaim in his battle with Demushu. The Riders manage to weaken the Over Lord before finishing him off with their Rider Slash attacks.

One of the Ganbariders is featured in his own web manga series which was hosted on the official Ganbarizing website until 2016.

Shift Ganbarider is a hypothetical Shift Car based on the Ganbarider.

Shift Ganbarider exists only as a sound programmed into the DX Drive Driver. 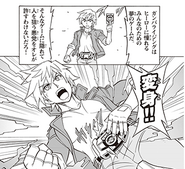 Gabarider Transforming
Add a photo to this gallery

Retrieved from "https://kamenrider.fandom.com/wiki/Ganbarider?oldid=641413"
Community content is available under CC-BY-SA unless otherwise noted.