Game Areas (ゲームエリア, Gēmu Eria) are digital fields generated by a Rider Gashat upon activation. When activated, a colored pixelated wave of energy envelops a wide radius around where the user is standing and randomly generates containers on the field that could contain Energy Items for the Rider to use in battle. Game Areas can be further enhanced by another Rider entering a Game Area and activating their Gamer Driver to generate their own field.

How this affects the field depends on which Kamen Rider is present (ex: having Brave and Ex-Aid on the same field creates blocks and treasure chests in the Game Area). It is unknown at this time if there are any negative side effects to creating a Game Area or if any effects or consequences of using it while the Gamer Driver is damaged are present. When the Dangerous Zombie Gashat is activated, its Game Area causes microbe Bugsters to evolve immediately rather than lay dormant in a human host. Genm can also manipulate a Game Area with his Critical Dead finisher, as he can generate energy constructs of "zombies" to attack a Rider and then detonate them to destroy the target.

A Game Area can be rewritten by using the Stage Select function on the Kimewaza Slot Holder, teleporting all participants into another battlefield.

A Game Area can also deactivate if the Gashat generating it is not inserted into a Gamer Driver after a certain period of time.Take Off Against the Direction of the Wind!

Using Legend Rider Gashats in a Game Area generates objects related to the Rider it is based on. For example, the Full Throttle Drive Gashat creates a digital data copy of the Tridoron which attacks an enemy by ramming them during transformation or it can be summoned to execute a Critical Strike variant of Drive's signature Speedrop Kick. 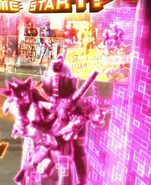 Xevious Game Area
Add a photo to this gallery

Retrieved from "https://kamenrider.fandom.com/wiki/Game_Areas?oldid=618851"
Community content is available under CC-BY-SA unless otherwise noted.