Game (遊戯, Yūgi) is the twenty-second episode of Kamen Rider Kuuga. This episode gives a glimpse of Kuuga's Rising power on Pegasus Form. This episode also reveals the dark truth behind the Gurongis' merciless killing.

As Ichijou continues to track the Bat Gurongi and figure on how to deal with the tricky means of Me-Garume-Re, he makes new discoveries regarding the motives of the Gurongi attacks.

After appearing, Go-Bada-Ba lifts his helmet’s visor and leaves after telling Kuuga that he would see him later. Yusuke searches for ULF 03 after that, but the Grongi had already disappeared.

Yusuke then summarizes what happened to Ichijo.

Sugita examines a bullet that has green residue on it as Ichijo calls him and says that he will try to track down the Grongi’s new hideout based on ULF 03’s flight patterns.

Sakurako and Jean examine several of the runes on Gouram. Enokida then gets a call from her mother, who says that she broke her promise to make papercraft toys with Sayuru. She apologizes and asks her mother to make them in her stead.

Ichijo receives a broadcast from Nozomi, who has narrowed the number of possible hideouts down to two locations. Yusuke heads to one of them.

As Jean and Sakurako eat at a restaurant, Sakurako asks Jean if anything is wrong, and he comments that promises to children should be kept.

At one of the locations, Ichijo finds a rose petal, grabs his gun, and sneaks into the area. Once there, he finds several of the Grongi speaking in their native language. Me Garume Za then tells Me-Garima-Ba that just because she has a weapon does not guarantee her becoming a Go. The two then argue before Ra-Baruba-Da arrives to break them up. She tells them that they must win the Gegeru to become a Go. Ichijo then leaves, but as he moves towards his car, Ra-Baruba-Da appears. He points his gun at her, but her only reaction is to comment that the Linto has changed. Ichijo tells her to freeze, but she then directs a flurry of rose petals at him, which causes him to faint.

When Ichijo awakens the next morning, he finds himself in his police car, with Yusuke in the passenger’s seat next to him. He didn’t find anything at his location, and when he went over to Ichijo’s location, he found him passed out. Ichijo tells Yusuke that ULF B1 spoke Japanese, and tells him that they need to concentrate on ULF 31. Yusuke then tells Ichijo that he’ll be able to hit ULF 31 using Pegasus Form, but his shot may be obscured by buildings, and Ichijo offers to lend his gun when Yusuke turns green next.

Enokida has discovered that intense light with Unidentified Lifeform 31’s cells can negate its cloaking for five minutes.

Sakurako pulls up a translation of the characters on Gouram’s claw-like bits that reads ‘the warrior and his servant join hands, giving rise to a grand future.’

Minori helps Tamasaburo open the shot, but Nana arrives. When her uncle asks why she wasn’t at drama practice, she tells him that Unidentified Lifeform 31 killed her instructor, and begins crying.

Ichijo arrives and tells Sugita that Sakurai will bring stun grenades, in order to disable its camouflage, but that it will only work for five minutes.

Sakurako tells Yusuke that the rune for ‘future’ could also mean ‘flight.’

As the clock strikes 10, Unidentified Lifeform 31 kills a police officer and reveals that the Grongi have to kill the Linto according to a set of rules. When Sugita demands his objective, he replies that there is no objective besides winning the game. He then continues killing, until Sakurai arrives with the stun grenades, allowing the police to see and fire on Unidentified Lifeform 31, He then flees, but the police chase him, and runs into Yusuke, who then transforms and fights him, but is unable to finish him off before he becomes invisible again. Ichijo then tosses Yusuke his gun as he turns into Pegasus Form and summons Gouram, who lifts him above the city. Using Pegasus Form’s senses, Yusuke manages to shoot and kill Unidentified Lifeform 31. Once the battle is over, Yusuke tells Ichijo that he thinks that he knows how to use Gouram. 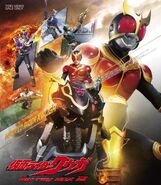 Retrieved from "https://kamenrider.fandom.com/wiki/Game?oldid=645916"
Community content is available under CC-BY-SA unless otherwise noted.