Gai Amatsu (天津 垓, Amatsu Gai) is the 45-year-old CEO of the Japan branch of Zaia Enterprise who wishes to take over the world using the Ark, and is willing to manipulate Aruto Hiden and Hiden Intelligence to do so. As Yua Yaiba's superior, he is the secret benefactor of A.I.M.S., with his company producing much of the agency's technology. After MetsubouJinrai.net's defeat and the Ark's awakening, he uses the Zaia Thousandriver to transform into Kamen Rider Thouser (仮面ライダーサウザー, Kamen Raidā Sauzā).

He is the main antagonist of Kamen Rider Zero-One, having masterminded the MetsubouJinrai.Net crisis.

Gai Amatsu was born on October 10, 1974. He graduated college at the age of 18 from Starford University, with a Masters Degree in Business Administration. While he was a student, he founded the website Thousand Network.

In 1996, he joined Zaia Enterprise and became the CEO of its Japanese branch in 2009. During this period, he came to idolize Korenosuke Hiden and took a photo with him.

Gai was a leading element in development of Ark, the special A.I. system that was supposed to manage the technology of Daybreak Town, especially HumaGears. However, Gai entered data about humanity's cruelty and greed into Ark that let its A.I. determine the destruction of humanity. This lead Ark to create MetsubouJinrai.net and cause several HumaGears to go berserk. It was only because of Hiden Intelligence employee Satoshi Sakurai that the HumaGears were stopped and Soreo Hiden sabatoging the Ark's launch into space, submerging it underwater. However, Daybreak Town got destroyed and Gai's ambitions apparently failed.

After the destruction of Jin, Yua confirms to Gai that Metsuboujinrai is over. However, Gai tells that Metsuboujinrai will never end as long as the Ark still exist and tells Yua about everything he knows prior to the Daybreak Town Accident. Yua in realizes that Gai has planned everything from the start. Gai leaves her as he proceeds to the next phase. The End of Each

After Aruto and Isamu destroyed the Ark Magia, the press asks Aruto why there are still Magia after the defeat of MetsubouJinrai.net. Gai interrupts the conference and claims that Aruto doesn't know everything and announces that he will buy Hiden Intelligence and solve the problem of the HumaGears. He then returns to his office and reveals the Zaia ThousanDriver before proclaiming that his era is coming. This is the Dawn of ZAIA

"The next-generation interface which bestows humanity with the same level of thought processing as A.I. That is the ZAIA Spec. With this, your mind will be run at 1000%"
―Gai Amatsu promotes ZAIA Specs on ZAIA Specs Promotion Video[src]

"The incident where the HumaGear went out of control the other day. That was an effect of the Ark reviving. When experiencing human malice if they reach a negative singularity point... a HumaGear will wirelessly connect to the Ark and go out of control."
"So, you did this to put the pressure on him?"
"Malice is a contagious thing... Passing from person to person... And now, from human to HumaGear."
―Gai explaining to Yua about HumaGears experiencing negative emotions and reaching singularity and consequent transformation into Ark Magias.[src]

Following Gai declaration to the press that he want to do T.O.B against Hiden Intelligence, he told Aruto that ZAIA Specs has been produced and has sold for 724%, but he then speechless after Aruto pointed out that ZAIA Specs were not sold as much as 1000%. He then challenged Aruto on the "5th Workplace Competition" and told him that if HumaGears win, ZAIA Enterprise will cancel the T.O.B, but if ZAIA Specs wins, ZAIA will continue their T.O.B, which Aruto accept that challenge.

Noticing that Aruto was losing control of his anger, Gai took Yua to the Daybreak city and made her create a stronger Progrisekey, which would connect Aruto to the Ark and leave him uncontrolled. The Metalcluster Hopper, the means of destroying Aruto's fate was completed during the last day of the trial, with Gai receiving the key from Yua.

After the revelation of the true culprit and he became Dynamaiting Lion Raider, Gai initially about to take the Raider but Aruto confronted him, criticizing him for his hypocrisy. Gai coldly implied that he did nothing wrong and showed no remorse for the deaths caused by his schemes, sending Aruto into a rage. Both men transformed into their Rider forms, with Thouser quickly gaining the upper hand. Knocking Aruto out of his transformation, Thouser forcibly inserted the new Progrisekey into the Zero-One Driver, triggering Aruto's transformation into Zero-One Metal Cluster Hopper.

As Gai expected, the Ark took control of Zero-One's body, with Aruto's conscious being subjected to the Ark's malicious data and forced to watch his body act beyond control. Hoping to test the Ark's power, Thouser attacked Zero-One. After failing to land a single hit, Thouser was knocked out of his transformation and would have been killed were it not for Vulcan's intervention. With the battle ended, Gai laughed madly, reveling in the Ark's power.

Gai as Thouser keep fighting against MetalCluster Hopper, succesfully extracting Mammoth data and counterattacking, though once again his Jacking Break couldn't match with Hopper's Authorise Buster Axe. Being a witness when Enji Matsuda become infected by Ark through MetalCluster, Gai used Thousand Break attack and defeated Aruto, putting him in bad condition. When leaving, Gai was confronted by Enji. On first he don't take interest with HumaGear, until Enji said about being interacted with Ark's will. This convinced Gai to go with his new ally.

During discussion Gai was surprised, when Enji declared a loyalty toward Zaia president, but then accepted Enji's plan about destroying Hiden. However, this lead to Gai's first mistake: Enji Matsuda in reality pretended to be influenced by Ark, and used Gai's trust to enable two HumaGears' infiltration to MetsubouJinrai.net's old hideout to extract Hiden Metal's data. Enraged for being tricked by "lowly HumaGear", Gai Amatsu forced Enji to transform into Arsino Magia and then transformed himself into Kamen Rider Thouser to annihilate Enji.

Luckily, Aruto arrived in time and used the MetalCluster ProgriseKey to transform once again into uncontrollable MetalCluster Hopper. Thouser observed, shocked, as Izu hands over Progrise Hopper Blade to Aruto, letting him to gain control over own body. Surprised by the Progrise Hopper Blade's strength and by fact his adversary could control MetalCluster form, Thouser could only defend himself, even using the Arsino Magia as a shield, but Hopper Blade's power freed Enji from Zetsumeriser's control. Enraged by that, Thouser renewed his attack on Aruto, unable to comprehend the fact that HumaGear could now be restored. Finally, he meet with humilliating defeat when Aruto, who believed in the HumaGears, combined the Progrise Hopper Blade with the Attache Calibur into Naginata Mode and unleashed the Ultimate Strash, defeating Gai for first time without losing control. De-transforming, an exhausted Gai said their next encounter will end with his victory and all will be under his foot before leaving. I'm in Love With Your Intelligence!It's Our Turn

Movies and other events

Kamen Rider Thouser is a playable character with other Kamen Riders of Showa and Heisei-Era.

"That's what I told you... HumaGears should all be scrapped as soon as possible. They're safe as tools, but when they have a mind and develop a sentience, that's unacceptable. Because A.I. have no reason to restrain their sentience."
―Gai admonishing Aruto about HumaGears reaching singularity, which makes them susceptible to the Ark's corruption.[src]

Gai is shown to be a cunning ruthless capitalist, believing in the supremacy of human beings over artificial intelligence and seeking to destroy the public image of HumaGears. Gai is also incredibly arrogant, as he believes that he and his company will usher in the next evolution of the human race. Gai's most notable personality trait is his frequent habit of using the phrase "1000%". This trait is also offensing for those who claimed their chance to success to be 100% or close to it with Gai telling them that he wants it to be 10 times of a better percentage.

Gai idolized Korenosuke Hiden and praised him for being able to predict that the future revolved around AI technology. However, as he revealed to Yua, he fears that Hiden's over-reliance on HumaGears and them reaching singularity are threats to the existence of humans and might soon bring extinction. This caused him to disagree with him and his grandson, Aruto, and wishes to defeat him to secure the future, even if it means sowing the seeds of discord between humanity and HumaGears.

Gai holds both his own and his company's public image in high regard and will do whatever he deems necessary to preserve it. Although he may justify any means to securing his victories, he possesses a level of sportsmanship as he threatened to sue Rentaro Tachibana and end his floral arrangement career after the florist cheated during the Workplace Competition and asked Yua to check if Tatsumi Arayashiki was behind the destruction in the city, though it was leading to his own victory. This is My FloristryShe is a Home-Selling HumaGear.

However, when Gai is personally engaged in a battle, as well as if he fails to achieve his goals, he resorts to using underhanded methods in order to secure his victories, like encouraging his representatives to incite violence from their competing HumaGears, stealing Zetsumerisers and using them on HumaGears and creating MetalCluster Hopper to have Aruto go berserk. Though Gai believes that he is manipulating Ark to discredit and impair HumaGears, Horobi says that his intentions are obvious to Ark and Gai will pay for his mistakes.

"How dare you?! You lowly HumaGear dare to fool me!"
―Gai enraged for being tricked by Enji Matsuda.[src]

Gai also takes pride in his youthfulness. Despite being 45 years old, he will respond that he is "eternally 24" if asked.

Thouser's physical statistics are the highest out of any Rider at the time of his debut, with only his jump height being lower than Zero-One's Rising Hopper, Shining Hopper, and Shining Assault Hopper forms. Though he was caught off-guard at first, Thouser was able to quickly counteract Shining Hopper's Shining Arithmetic and overwhelm Zero-One with his superior physical strength. He is also able to easily overcome Vulcan Assault Wolf and Zero-One Shining Assault Hopper.

Another version of Thouser has appeared in other media, with blue color replacing every purple parts on the body. The black horn on the center of forehead and the mask becomes silver.

Kamen Rider Thouser is composed of the following parts:

This form has the following finishers: 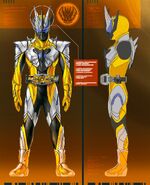 Retrieved from "https://kamenrider.fandom.com/wiki/Gai_Amatsu?oldid=553059"
Community content is available under CC-BY-SA unless otherwise noted.