The FullBottle Buster consists of the following parts:

The Fullbottle Buster was designed by Sento along with the FullFull RabbitTank Bottle. The Treacherous Deathmatch 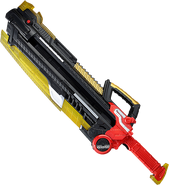 Buster Cannon Mode
Add a photo to this gallery

By inserting up to four Fullbottles into the weapon's Quad Full Bottle Cylinder, it can activate special finishing moves:

Fullbottle Break (Gold Rabbit)
Add a photo to this gallery

This finisher has two variations:

Retrieved from "https://kamenrider.fandom.com/wiki/Fullbottle_Buster?oldid=632280"
Community content is available under CC-BY-SA unless otherwise noted.