Friendship, Chaos, and the Belt Left Behind

Friendship, Chaos, and the Belt Left Behind (友情と暴走と残されたベルト, Yūjō to Bōsō to Nokosareta Beruto) is the thirty-third episode of Kamen Rider OOO.

Eiji is summoned to a park owned by a former school friend who wants to be a greater help to his dreams.

Using his Pteranodon Yummy to see if he is more worthy of housing the purple Core Medals than he is, Maki witnesses Eiji become Kamen Rider OOO Putotyra Combo against his will again with Ankh unable to hold the Core Medals. Later, as an argument over Eiji's inability to control the purple Core Medals, Chiyoko arrives with a letter with theme park tickets for Eiji from a young man named Yuichi Kitamura who clams to be Eiji's old friend from high school. The gang arrive to the theme park where Eiji meets Kitamura and finally remembers. Everyone but Ankh has fun until Hina disappears and everyone splits up to find her. As Kitamura arrives to help Eiji find Hina, a Yummy attacks Akira who dons the Birth armor to overpower the monster until it molts into the Fukurō Yummy and flies off with Akira as Shintaro arrives to find the Birth Driver. Eiji arrives soon after and learns of Akira's abduction, yet feels they need to find Hina first as Ankh decides to handle it himself. However, Ankh finds Kitamura and realizes he is the Yummy's source before falls for the man's trap. Kitamura then lead Eiji and Shintaro to Hina before the two are attacked by the Fukurō Yummy. Though Eiji using the purple Core Medals is out of the question, Shintaro felt not ready to become Kamen Rider Birth and is captured soon after. However, as the purple Core Medals attempt to take control, Ankh arrives in time and has Eiji become Kamen Rider OOO Sagohzo Combo instead to overpower the Fukurō Yummy until he uses Shintaro as a shield to escape. As Kitamura and Hina help Eiji find the others, with him keeping quiet of the former's action against him, Ankh is unaware that he is targeted by his other self and Kazari as the Fukurō Yummy's next victim. 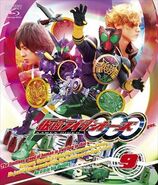 Retrieved from "https://kamenrider.fandom.com/wiki/Friendship,_Chaos,_and_the_Belt_Left_Behind?oldid=491178"
Community content is available under CC-BY-SA unless otherwise noted.