The Faizphone X (ファイズフォン, Faizufon Ten, "Faizphone Ten")[1] is a Ridewatch device derived from Kamen Rider Faiz's SB-555P Faiz Phone. It is wielded by Tsukuyomi and Geiz Myoukouin, two time travelers from the year 2068[2]. Woz also shown to possess another Faizphone X in his arsenal and is later given to Sougo Tokiwa.

The Faizphone X consists of the following parts:

Recovering Sougo Tokiwa from nascita on November 30th, 2017, of the World of Build timeline, Tsukuyomi used the Faizphone X to render him as well as residents Sento Kiryu and Ryuga Banjo unconscious before returning Sougo to September 2018. Soon after, Sougo was attacked by Another Build, and so Tsukuyomi used the Faizphone X to fight the Another Rider, holding him off before Sougo used the Ziku-Driver provided by Woz to become Kamen Rider Zi-O. Kingdom 2068

On October 2nd, 2018, Tsukuyomi pointed the Faizphone X as she confronted Masato Kusaka. Switch On! 2011

In Phone Mode, the Faizphone X can be used to communicate across different time periods.

By inputting 5-5-5 as an activation keycode in Phone Mode when a user is in FaizArmor, the Faizphone X can summon one of two weapons: the Faiz Shot Shot or the Faiz Pointer Pointer. 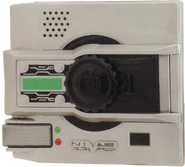 Faiz Shot Shot
Add a photo to this gallery

Likewise, with the original Faizphone's codes, the Faizphone X's also has its own ammunition modes:

Unlike its predecessor, the blasts can also be set to stun targets rather than injure them if so desired by adjusting the energy output. Tsukuyomi uses this mode to knock out people from the past so Sougo does not reveal anything about the future or to avoid witnesses. Kingdom 2068

Retrieved from "https://kamenrider.fandom.com/wiki/Faizphone_X?oldid=682019"
Community content is available under CC-BY-SA unless otherwise noted.