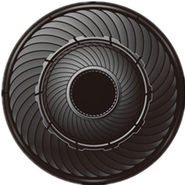 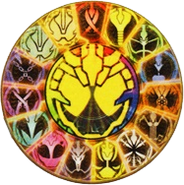 First, Ghost must activate the Eyecon Driver by pushing the ResonaTrigger (レゾネイトリガー, Rezoneitorigā). then pressing it again to trigger the transformation of Grateful Damashii.

Once transformed, Ghost can summon any Parka Ghost of his choice by pulling the RevolTrigger (リボルトリガー, Riborutorigā) and hitting the Resonate Trigger to finalize it.

To dismiss Grateful Damashii, Ghost must press and hold the Resonate Trigger once.

The Eyecon Driver G is composed of the following parts:

The Eyecon Driver G was created by Edith apparently for the sole purpose of allowing the Gamma Emperor to access the hidden power of the prayer room. Conflict! The Terms of Resolution! However, it was a failure, and was left incomplete in a secret room where Takeru's Eyecons would later be placed after they were taken by Igor. Amazing! The Gamma's World!

When Takeru went to the Gamma World with Makoto, he heard Musashi's voice from out of nowhere and followed it. Along the way, they find themselves a secret room where all his Eyecons are, as well as Necrom's Mega Ulorder. With all of his Eyecons back, he saw an unusual big Eyecon in the middle of the room and he gets electrified when he touched it. Conspiracy! Adel's Trap!

The Eyecons started leaving their Riders to the laboratory underneath Daitenku Temple (with Alain's leaving him right when he needed Grimm), though Makoto's Eyecons only left when his Gamma Eyecon was destroyed while defending a now human Alain from being killed by Jabel, who now has an Gamma Ultima Eyecon. When Takeru finally came to the battlefield as Ghost and was being thrashed around, all the Parka Ghosts came back and stored themselves in the Eyecon Driver G, completing it. With the help of the 15 Parka Ghosts, Takeru transformed into Ghost Grateful Damashii and defeated Jabel in the process, even when Jabel gained an Fire upgrade for Ultima mid-battle. Intimate! The Giant Eyecon!

to finish him. Soon after, Ghost arrived to aid Alain from a force of Gamma Commandos led by Machine Gun Gamma and Seiryuto Gamma that were sent by Igor to kill him, enlisting both Goemon and Robin Hood to destroy them via an Omega Formation. Appearance! The Mysterious Warrior!

Facing the younger Hikoki Gamma, Ghost Grateful Damashii engaged him in a chase which he eventually ended by summoning a succession of Benkei, Tutankhamun and Musashi using their respective weapons to propel him higher into the air so he could intercept and destroy the Gamma with the Grateful Omega Drive. Disaster! The Red Sky!

Engaging both Hikoki Gamma brothers with Necrom, Ghost switched from Toucon Houdini Damashii to Grateful Damashii with Necrom providing the Grimm Eyecon as he reverted to his default Necrom Damashii. Performing their respective Omega Drive kicks, Ghost and Necrom swiftly destroyed the elder and younger brothers respectively. Conflict! The Terms of Resolution!

Searching for Makoto's body in the Gamma World, Takeru would repeatedly assume Grateful Damashii. Facing a pair of Gamma Superiors leading a pack of Gamma Commandos, Ghost countered them by summoning Ryoma and Himiko to back him up, soon enough ending the battle by performing an Omega Formation with Ryoma and Himiko which destroyed the Gamma force. Later, Takeru met a second Gamma force which he ragefully engaged as Grateful Damashii after they murdered Adonis, quickly destroying them all with a Grateful Omega Drive utilizing the Gan Gun Saber and Sunglasseslasher. Do-or-Die! Ready for Infiltration!

Soon after, Takeru and Alain were confronted by Adel who sent forth a pillar of fire at them which was countered by the 15 Eyecons, revealing itself as the Gammaizer Fire. Assuming Grateful Damashii, Takeru found himself overpowered by the Gammaizer, only managing to escape with Alain thanks to Nobunaga summoning himself from the Eyecon Driver G to fight and distract the Gammaizer with a version of Omega Spark. Later, facing the Gammaizer again with Sepcter and Necrom, Takeru found himself unable to maintain the Grateful Damashii as its power was externally restricted, paralyzing his body before cancelling the transformation, forcing Makoto to assume Deep Specter Damashii for the first time to defeat the Gammaizer. Bursting! Power of the Depths!

Forever! Cries of the Heart!

Reminiscence! Secret of the Mind!

Refusing to rely on the power of Mugen Damashii alone, Takeru used the Eyecon Driver to bring forth all fifteen Parka Ghosts in an engagement against Adel and the remaining eleven Gammaizers which ended disastrously as they were defeated by the Gammaizers, with the ghosts' dissipating strength negating Grateful Damashii and forcing Ghost to demonstrate Mugen Damashii against the Perfect Gammaizer. Takeru's confidence in the heroic ghosts did not waver, however, and they returned to him as he asserted his faith in his allies against Gyro. After using his ten personal Damashii to overwhelm Gyro and his Gamma Commandos, Ghost performed a Mega Omega Formation to defeat him. Resurrection! Hero's Soul!

At Billy the Kid's urging, Ghost assumed Grateful Damashii against the Gammaizer Magnetic Blade, summoning him alongside Musashi and Houdini who restrained the Gammaizer's blades and magnetism respectively as Billy the Kid used his firepower to free Shinichiro Natsume from the Gammaizer's body, allowing Ghost to finish it by assuming Mugen Damashii. Courage! Tragic Resolution!

Grateful was fourth in a succession of forms assumed by Ghost in a vain attempt to engage the Hatena Bugster; Takeru ultimately resorted to a new power. Kamen Rider Heisei Generations: Dr. Pac-Man vs. Ex-Aid & Ghost with Legend Rider

During the battle against Foundation X, Ghost assumed Grateful Damashii and summoned Musashi, Nobunaga and Grimm to assist him as he fought the Guardians. Kamen Rider Heisei Generations FINAL: Build & Ex-Aid with Legend Riders

The voice of the Eyecon Driver G is provided by m.c.A·T.