Much like Ex-Aid himself, the armor can generate Game Areas and create item blocks that Zi-O or Geiz can use as platforms and much like Action Gamer Level 2, grants its user great agility and jumping ability. The only difference from Ex-Aid is that when the Rider using the Armor attacks, the "Hit!" and other effect words that are projected are in katakana (ヒット！)  rather than in English for Zi-O. When Geiz uses the armor, the effect words remain in English.

"With no continues..."
"...I've got a feeling I can clear this!"
―Sougo Tokiwa attempting to channel Emu Hojo[src]

Fighting Another Quiz alongside Zi-O, Geiz assumed Ex-AidArmor while Zi-O assumed DecadeArmor OOO Form. Together, their performed their respective Rider Kicks only to be frozen in time by the Time Jacker Ora, who moved the two Riders so that they were aiming at each other before taking her leave with Another Quiz. When the flow of time resumed, Geiz and Zi-O struck each other with their finishers, forcing them out of their respective transformations. The Quiz Shock 2040

Facing a second Another Ex-Aid, Geiz took the Ex-Aid Ridewatch from Sougo to assume Ex-AidArmor. Geiz performed use his Critical Time Burst to defeat Another Ex-Aid, only to be countered and forced out of his transformation much to his surprise. Another Zi-O 2019 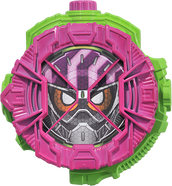 Ex-Aid Ridewatch (Inactive)
Add a photo to this gallery

Critical Time Burst
Add a photo to this gallery

Retrieved from "https://kamenrider.fandom.com/wiki/Ex-AidArmor?oldid=512356"
Community content is available under CC-BY-SA unless otherwise noted.