Transform! The Orange from the Sky!?
The Elementary Inves (初級インベス, Shokyū Inbesu) are human-sized Inves that dwell in Helheim Forest.

Elementary Inves can be summoned by Lockseeds from the Helheim Forest during an Inves Game to battle against the Armored Riders (opponent) or the opponents' Inves. In a normal Inves Game, they are about the same size as a small child, but when summoned by an Armored Rider or through a jailbroken Lockseed, they will retain their full size. Some Elementary Inves display the ability to grow wings and fly.

If they break out of an Inves Game, they will go into a rampage and start attacking until they are either sent back into the Helheim Forest or killed. When they eat a mature Lockseed, they will evolve into a stronger, animal-based form called a Advanced State.

Through data absorbed from Kouta Kazuraba as Man of the Beginning, ZZZ Megahex created a force of Mecha Inves, mechanical recreations of the Elementary Inves. A large number of them were destroyed alongside the Plain Roidmudes (Lost Number) by Kamen Riders Drive and Gaim with help from the other Armored Riders and Roidmude generals, with any survivors shutting down with Megahex's demise. [Kamen Rider × Kamen Rider Drive & Gaim: Movie War Full Throttle]

As a result of the Time Jacker Sworz transforming Team Baron member Asura into Another Gaim, the Kouta Kazuraba of that timeframe lost his power as Armored Rider Gaim as it was erased from history in the midst of a battle with a pair of Elementary Inves. The Inves, however, survived the temporal disturbance unlike the other adversaries of the past Heisei Riders. Indeed, they continued to roam in the Helheim Forest as late as November 2018, menacing the members of Team Baron that Asura had banished to Helheim over the past five years.

On November 18th, 2018, Geiz Myoukouin, who had been banished to Helheim, found two Elementary Inves attacking a Team Baron member. Transforming into Kamen Rider, Geiz quickly destroyed the pair of Inves with a series of strikes from his weapon, the Zikan Zax. Immediately after, having been alerted by Kaito Kumon, Geiz fired a blast to destroy a third Elementary Inves. [Zi-O On Parade 2018]

The Elementary Inves were portrayed by numerous suit actors. 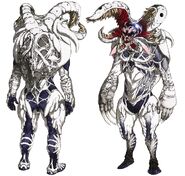