Gentaro finds out that JK was just using him for protection against the Zodiarts and has stolen the Elek Astroswitch but Gentaro is determined to show JK the power of frienship and help JK despite being tricked by the other.

Overseeing the fight, the Scorpion Zodiarts meets with the red-eyed man to discuss the Unicorn Zodiarts's sudden evolution in relation to being near Kamen Rider Fourze. The next day, after a day of school while avoiding Kengo on the matter of the Elek Switch, Gentaro meets up JK to look for the item. Eventually, the two run into Nitta after he interrogates Takahiro and Megumyon on JK's location. Nitta then reveals to Gentaro that JK had used him as a bodyguard in the past, costing him a fencing tournament prior to learning that he was used. As Nitta activates his Zodiarts Switch, Gentaro transforms into Kamen Rider Fourze to keep the Unicorn Zodiarts from JK.

But during the fight, when he tries to run for his life, JK trips over and is exposed as the thief of the Elek Switch and that he only used Gentaro to keep Nitta at bay. In shock at the betrayal, Kamen Rider Fourze is knocked out by the Unicorn Zodiarts before he abducts JK. Coming to at the Rabbit Hatch, secretly brought there by Tomoko, Gentaro is chewed out by Kengo for trusting JK and not telling him about the Elek Switch. Though the others are against it, Gentaro intends to save JK with Yuki giving him the location.

Elsewhere, Nitta offers JK a chance at freedom by letting him call someone from his inner circle over, but JK is horrified that his "friends" are not going to save him. Once time runs out, Nitta is about to use the Zodiarts Switch in its Last One stage when Gentaro arrives, much to the shock of JK and Nitta. Gentaro says that he still wants to befriend JK, even though he was taken advantage of by the younger student. A furious Nitta reveals that he never intended to keep his word of freeing JK as he uses the Zodiarts Switch and his mind is transferred into the Unicorn Zodiarts's body. Gentaro transforms and manages to hold the Zodiarts off, just as Kengo and the girls save JK.

With JK giving him back the Elek Switch and accepting his friendship with his special handshake, Kamen Rider Fourze uses the Astroswitch which transforms him into Kamen Rider Fourze Elekstates. With his new power, Kamen Rider Fourze overpowers the Unicorn Zodiarts before destroying him with Rider Ten Billion Volt Break, letting him turn the Zodiarts Switch off. Though JK goes to attack Nitta in revenge, Gentaro tells him to drop his anger as he offers friendship to the other student. Soon after, as an excited JK is made a new member of the Kamen Rider Club to Kengo's dismay, the red-eyed man tells the Scorpion Zodiarts to continue observing Kamen Rider Fourze to find out if he can be of use to them or a hindrance in their plan. 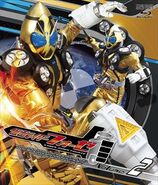 Retrieved from "https://kamenrider.fandom.com/wiki/Electric_Shock,_Steadily?oldid=581439"
Community content is available under CC-BY-SA unless otherwise noted.