" I am Edison...Edison! Are you Edison? No, you're not!"
―Edison's only words when summoned from Eyecon Driver G[src]

Edison Damashii (エジソン魂, Ejison Damashī, lit. "Edison Soul") is an alternate yellow electricity-based form of the ghost Riders themed after Thomas Edison, the famed American inventor whose most notable and remembered contribution to history was his creation of the first commercially successful electric lightbulb. Accessed through the Edison Ghost Eyecon, this form bears the Persona Inventor (ペルソナインベンター, Perusona Inbentā) helmet with the Face Light-bulb (フェイスライトバルブ, Feisu Raitobarubu) face-plate.[1] While it is mostly used by Kamen Rider Ghost, it can also be used by other Riders.

While assuming Edison Damashii, a Kamen Rider dons the Sparking Hood (スパーキングフード, Supākingu Fūdo) adorned with the Filament Shaft (フィラメントシャフト, Firamento Shafuto) where they are able to conduct electricity and use it to charge up their weapon for electricity-based attacks, as well as "spark" some thought into them whenever the Sparking Hood receives electrical stimuli.

Specter used it following the Edison Ghost Eyecon's theft when he, as Specter Nobunaga Damashii, used the Omega Spark finisher to blast Ghost Edison Damashii out of his Rider Kick and transformation, then stamp on the Rider's wrist when he tried to grab the Eyecon. Given how the Eyecons contain sentience, it is unknown why Edison betrayed Takeru.

Later, during the battle with Jabel, Ghost is once again able to assume Edison Damashii after getting the Edison Ghost Eyecon back.

During the battle with Kamen Rider Necrom, Ghost lent his Edison Ghost Eyecon to Specter so he could use it to change into Edison Damashii and use the Gan Gun Hand in Gun Mode to paralyze Necrom.

As one of the 15 heroic souls, Edison Damashii's power is also channeled through the Grateful Damashii which is accessed by Ghost via the Eyecon Driver G, appearing on Grateful's Armor Sublime as the EdiSonic Shoulder (エジソニックショルダー, Ejisonikku Shorudā). [2] Manifesting as a body, the Edison Ghost fights with his weapon of choice being the Gan Gun Saber Gun Mode

In 2005, long after his death, Thomas Edison was reincarnated as a Parka Ghost by the Ghost Hunters with help from Sennin. Among the 15 luminary ghosts assembled by the lead Ghost Hunter, Ryu Tenkuji, who personally picked them with his reasoning being that these figures were people whose lives burned the brightest, their purpose was to counter the Gammaizers, the 15 deities of the Gamma World, in preparation for the Gamma invasion of the human world. Vacant Ghost Eyecons were prepared for each of the luminary ghosts, however, with the unforseen betrayal of Chikara Saionji leading to Ryu's death and the dissolution of the Ghost Hunters, all 15 ghosts were left sealed in unique objects which pertained to them each and would not be freed until the Gamma invasion finally arrived ten years later. Reminiscence! Secret of the Mind!

In an evidently forgotten dream that Takeru had before his first death, the ghost of Edison as well as Musashi and Newton witnessed the arrival of a miniature spaceship which contained their Ghost Eyecons along with the Ore Eyecon whom exited after it arrived at a concert. Signaled by Sennin pointing to his illustration in a book of historical figures, Edison would be second in a succession of three Damashii which were used by Kamen Rider Ghost to fight the Gamma Commandos. Kamen Rider Ghost Special Preceding Video

Ghost briefly adopted Edison Damashii against the Ono Gamma but opted to finish the fight with the newly acquired Robin Damashii when the Gan Gun Saber Gun Mode failed to overcome Ono's shield and tomahawks. Bullseye! Bow and Arrow of Justice!

Facing off against the second Kamen Rider, Specter, Ghost assumed Edison Damashii to match Specter's Nobunaga Damashii, ending in disaster when their Omega Drives met in a clash which Specter prevailed. Forced out of his transformation, the beaten Takeru was unable to stop Specter from taking the Edison Eyecon for himself. Shock! Mystery Kamen Rider!

Having captured the Edison Eyecon, Specter assumed Edison Damashii himself when he next met Ghost, using Edison's electricity with the Gan Gun Hand Rod Mode to effortlessly incapacitate Takeru who dropped the Musashi Eyecon as his transformation was canceled. While Takeru fled as his depression caused him to disappear, the Musashi Eyecon was taken by Akari Tsukimura who refused to let Specter have it only for him to relent from taking the Eyecon just this once. Destiny! Reviving Melody!

, Edison Damashii was second in a succession of three Damashii which were assumed by Ghost in his fight with the Shocker cyborg Shiomaneking in the presence of the Zyuohgers

Edison was defeated by Adel Electric during the disastrous engagement against Adel and his 11 remaining Gammaizers by the 15 Heroic Ghosts and Ghost Grateful Damashii, having chosen not to rely on Mugen Damashii's power alone while facing the Gammaizers. Viewing themselves as now obsolete, the heroic ghosts would enter a brief period of unresponsiveness before soon enough returning to Takeru's side, as he asserted his faith in them, against Gyro. Resurrection! Hero's Soul!

Attacked by Dark Necrom Red and Dark Ghost, Ghost was robbed of his Eyecons which were taken as part of Argos' machination. When Takeru and his friends followed them to the Island of Eyecons, Edison was found to be living in harmony as one of 100 reincarnated historical figure within the Village of Heroes. When Argos' Gamma forces attacked the village, Edison was struck down and reduced back to an Eyecon which was recovered along with the others by Argos. Gathering all 100 heroic Eyecons, Argos used them as a sacrifice along with Darwin's power of evolution to convert Takeru's dead body into a vessel for the ultimate Eyecon, the Extremer Driver, which he intended to use to fulfill his ultimate agenda of converting all life on both Earth and the Gamma World into ghosts. Ultimately, however, Takeru was able to gain the strength of the 100 heroes along with his friend's spirits, allowing him to defeat Argos seemingly at the cost of his own existence only for the 100 heroes to use their power to restore his soul with the original fifteen heroes returning to his side as he came back to Earth. Kamen Rider Ghost the Movie: The 100 Eyecons and Ghost's Fateful Moment

Edison was second in a succession of forms assumed by Ghost in a vein attempt to engage the Hatena Bugster. Soon after, Ghost brought forth all fifteen heroic spirits with the Eyecon Driver G only for Hatena to repel even the God Omega Drive; Takeru would ultimately resort to a new power. Kamen Rider Heisei Generations: Dr. Pac-Man vs. Ex-Aid & Ghost with Legend Rider

In early September 2018, Edison's Parka Ghost was summoned alongside Ore, Musashi and Newton via the GhostArmor wielded by Geiz, who had traveled from the year 2068 to kill Sougo Tokiwa, who became Kamen Rider Zi-O. Kingdom 2068 Best Match 2017

On December 9th 2018, the Edison and Musashi Ghosts were summoned by Geiz GhostArmor in his battle against the duo of Another Ghost, who summoned Newton and Robin Hood, and Decade Ghost, who summoned Billy the Kid and Benkei. The six Parka Ghosts engaged in a brief skirmish which soon ended as they seemingly annihilated one another. GO! GO! Ghost 2015

Edison is among the historical figures who are featured in Stories of the World's Greatest People, the book passed down to Takeru Tenkuji by Ryu Tenkuji. He is acknowledged under The Unyielding Invention King: Thomas Edison (不屈の発明王 トーマス・エジソン, Fukutsu no Hatsumei-ō: Tōmasu Ejison). Blitz! Inventor King! 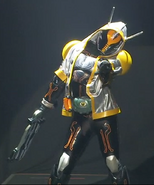 Akari as Ghost Edison Damashii
Add a photo to this gallery

Necrom Edison Damashii
Add a photo to this gallery

Edison Ghost
Add a photo to this gallery

Omega Drive (Edison)
Add a photo to this gallery

Omega Drive (Deep Edison)
Add a photo to this gallery

As with the rest of the 15 heroic Parka Ghosts, Edison is voiced by Tomokazu Seki (関 智一, Seki Tomokazu). His human form in Kamen Rider Ghost the Movie: The 100 Eyecons and Ghost’s Fateful Moment is portrayed by Chad Ian Mullane (チャド・イアン・マレーン, Chado Ian Marēn).

Retrieved from "https://kamenrider.fandom.com/wiki/Edison_Damashii?oldid=621386"
Community content is available under CC-BY-SA unless otherwise noted.