EXCITE is an opening theme (OP) from Kamen Rider Ex-Aid. It was performed by Daichi Miura[1].

Unlike most other opening themes, this song has been used in different ways depending on the episode.

The full version of the song, released on January 18, 2017, comes in 4 different versions. Aside from the CD version and the MV version (which includes a DVD), there are two other limited edition versions that come with a unique toy-exclusive Rider Gashat each, both being variations of the Mighty Action X Gashat. The first is the Theme Song version, which contains a short edit of the theme song, while the second is the Battle Sound version which contains a battle soundtrack from the television series.

All four editions of the single will include the full song, the instrumental version, a Carpainter Remix version, and a Quarta 330's Pixelated Remix version.

Another version of the TV-size cut of EXCITE was included as a playable song in the Taiko no Tatsujin arcade game. 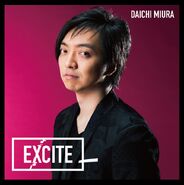 Cover for the MV version single 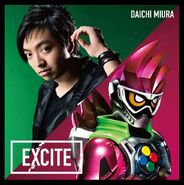 Cover for the CD version single 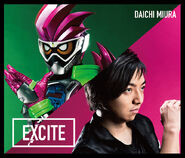 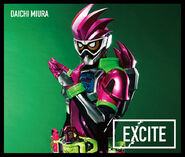 Retrieved from "https://kamenrider.fandom.com/wiki/EXCITE?oldid=507800"
Community content is available under CC-BY-SA unless otherwise noted.