The Rotary Sword-Gun Drill Crusher (回転剣銃 ドリルクラッシャー, Kaiten Kenjū Doriru Kurasshā) is Kamen Rider Build's primary weapon[1] that can be accessed by any form of Build. It is also Kamen Rider Evol's personal weapon in Rabbit Form. It can be wielded by Sento and Ryuga while not being transformed with any drawbacks. Later Kamen Rider Killbus and Kamen Rider Metal Build are also capable to wielding Drill Crusher as their weapon.

The Drill Crusher is able to change from its base Blade Mode (ブレードモード, Burēdo Mōdo) into its Gun Mode (ガンモード, Gan Mōdo) by removing the Drill Spiral Blade and inserting the tip into the Connect Lancer on the side the handle, allowing Build to switch from close quarter combat to ranged combat. 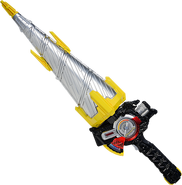 The Drill Crusher's finisher is the Vortex Break (ボルテックブレイク, Borutekku Bureiku). To activate it, Build must plug a Fullbottle into the Full Bottle Slot of the weapon.

Build performs a slash channeling the power of a Biotic Fullbottle.

Build performs a slash channeling the power of an Abiotic Fullbottle.

Build fires a projectile channeling the power of a Biotic Fullbottle.

Build fires a projectile channeling the power of an Abiotic Fullbottle.

Build can combine the Drill Crusher's finisher with the Build Driver to perform a powerful finisher.