Dragon's Cry (ドラゴンの叫び, Doragon no Sakebi) is the ninth episode of Kamen Rider Wizard. This episode marks the debut of Flame Dragon.

After finding out that Hiroki is the son of his old friend Mikiko, Haruto suggests that he watches over him until the Phantom case is solved. However, Phoenix attacks Mikiko instead of bringing Hiroki into despair and when Haruto realises this, he searches for his father.

As Mikiko is hospitalized, Rinko rescues Haruto from the river and brings him back to the shop. After realizing that Phoenix's objective is to kill Hiroki's parents to throw him into despair, Haruto leaves in a rush to protect Hiroki's father, rescuing him from the Phantom when he is about to kill him.

Without enough strength to face Phoenix, Haruto flees away to take the father to the hospital instead, collapsing due to the effort. After having a nightmare about Phoenix killing Hiroki's parents and the boy turning into a Phantom, Haruto awakens determined to confront him to protect the family, but he knows he lacks the power to do so. Just as he finds himself out of options, Koyomi brings to Haruto the Transformation Ring made from the stone brought by the White Garuda.

When Phoenix appears at the hospital, Haruto tries to invoke the power of the new Transformation Ring several times until he finally succeeds. Having a vision of his own parents death, Haruto comes face to face with his inner Phantom, WizarDragon, who told him that although the Transformation Ring can indeed channel the Phantom's power, its use may eventually lead him to his destruction. Haruto replies that he does not fear Wizardragon's powers as he brings hope to him, and he manages to access the Kamen Rider Wizard Flame Style's newly evolved form, Kamen Rider Wizard Flame Dragon.

The Magic Ring that apparently had no powers is revealed to be the Special Ring, allowing Haruto to invoke Flame Dragon's Dragon Breath attack and defeat Phoenix. As a few days pass, Haruto tells the others that both Hiroki's parents are recovering, while Medusa berates Phoenix, who is revealed to have been revived, for underestimating Haruto. 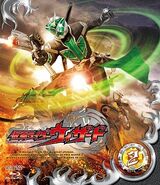 Retrieved from "https://kamenrider.fandom.com/wiki/Dragon%27s_Cry?oldid=492150"
Community content is available under CC-BY-SA unless otherwise noted.