Partnered with Ryuga, they first attacked Ouja's monster, saving Femme, and killed Genocider before Femme killed Ouja. Dragblacker later assisted its master in his combat against Femme and Knight before Ryuki joined the battle and killed him via a standard Dragon Rider Kick.

Dragblacker here is a corrupted Dragreder after Ryuki was possessed by his late brother and tainted into Ryuga.

Kamen Rider Ryuki: World of If

After Shinji abandoned his current Advent Deck for Ryuga's, he is driven into madness by this power, followed by the transformation into Ryuga Survive. While Dragblacker didn't appear, if Ryuga did evolve, Dragblacker might as well received the same effect, presumably transforming into a replica of Dragranzer.

In the World of Faiz, after Daiki took Tsukasa's Ride Booker, Narutaki took advantage of the situation as he took Tsukasa into another dimension to be killed by Kamen Rider Ryuga. However, after interrogating Kiva-la on the whereabouts, Daiki intervenes while claiming it was to get the Faiz Gear as he gives Tsukasa back the Ride Booker.

The alternate Dark Rider Ryuga from the World of Negatives was also able to summon a Dragblacker, which he did while fighting Decade after he acquired the K-Touch and assumed Complete Form. Decade summoned Final Kamen Ride Ryuki Survive as Ryuga prepared his Final Vent with Dragblacker, with Decade's final attack prevailing and destroying them both. The Walking All-Rider Album

Dragblacker was among the Contract Monsters that fought Kamen Rider Decade along with their contract holders in the Rider War. He, along with Dragreder, attacked Decade head on, but were shot down before they could even reach him.

Dragblacker was one of many Mirror Monsters brought over to Sougo Tokiwa's world as the Rider Worlds began to merge.2019: Vanishing Watches

Dragblacker was destroyed along with several other monsters by Kamen Rider Ohma Zi-O. 2019: Apocalypse

So far like Dragreder, its known body parts are the blade-like tail the Drag Tail (ドラグテイル, Doragu Teiru), armored abdomen Drag Body (ドラグボディー, Doragu Bodī) and its mouth the Drag Jaw (ドラグジョー, Doragu Jō), which enables it to perform Drag Breath (ドラグブレス, Doragu Buresu), a fireball spit with the temperature of 6,000°C (10,832°F). Compared to Dragreder as well, its Drag Breath can petrify the target in place for its master to attack.

Through the use of certain Advent Cards, parts of Dragblacker's body can be used by Ryuga as weapons or other equipment. 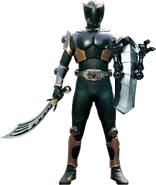