The Donkachi (ドンカチ, Donkachi Pun off of "Tonkachi" (トンカチ, "Tonkachi"), meaning "hammer") is the Armored Rider Arms Weapon granted either by accessing Donguri Arms or via the summoning ability of Kiwami Arms. It takes the form of a war hammer, with the head of said hammer taking the form of a stylized acorn. 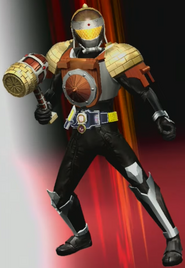 After Gridon activates his Sengoku Driver's Squash function, he spins at high speeds with the Donkachi held out. The spinning forms an acorn projection before Gridon knocks the opponent with a high-velocity hammer slam. Performed in episodes 6, 32

After Gridon activates his Sengoku Driver's Au Lait function, he dives from above and strikes the enemy with the Donkachi. Performed in episode 11

After Gridon activates his Sengoku Driver's Sparking function, he swings the Donkachi, sending a pulse of energy at the target. Performed in episode 32

Donguri Sparking: Gridon Impact
Add a photo to this gallery

Retrieved from "https://kamenrider.fandom.com/wiki/Donkachi?oldid=555508"
Community content is available under CC-BY-SA unless otherwise noted.