Donguri Arms (ドングリアームズ, Donguri Āmuzu, lit. "Acorn Arms") is an alternate acorn-based armored Medieval Squire form of Armored Riders. Accessed through the Donguri Lockseed, this form's Arms Weapon is the Donkachi, while the helmet the Rider wears is the Dome Casque (ドームカスク, Dōmu Kasuku) with the Nut Eye (ナットアイ, Natto Ai) visor. While it is the default form of Armored Rider Gridon, it can also be used by other Riders.

Proto Gridon Donguri Arms
Add a photo to this gallery 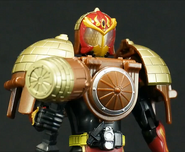 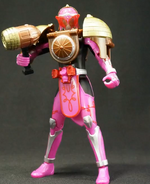 Kamuro Donguri Arms
Add a photo to this gallery

Donkachi
Add a photo to this gallery

Donguri Lockseed (unlocked & opened)
Add a photo to this gallery

After Gridon activates his Sengoku Driver's Squash function, he spins at high speeds with the Donkachi held out. The spinning forms an acorn projection before Gridon knocks the opponent with a high-velocity hammer slam. Performed in episodes 6, 32

After Gridon activates his Sengoku Driver's Au Lait function, he dives from above and strikes the enemy with the Donkachi. Performed in episode 11

After Gridon activates his Sengoku Driver's Sparking function, he swings the Donkachi, sending a pulse of energy at the target. Performed in episode 32

An unnamed Armor Part strike is seen in episode 41, where Gridon's Donguri Armor Part back into its normal nut form, making Kamen Rider Bravo throwing Gridon himself into Kamen Rider Zangetsu Shin, allowing them to leave from the battle.

Retrieved from "https://kamenrider.fandom.com/wiki/Donguri_Arms?oldid=581399"
Community content is available under CC-BY-SA unless otherwise noted.