A Friend in Need

The Invasion of Leawood

Prince Dex was the titular protagonist of the series Saban's Masked Rider. He is the prince of Edenoi who received the powers of the Masked Rider from his grandfather King Lexian to oppose the evil forces of Count Dregon. On Earth, he takes up the alias of Dex Stewart.

Dex is a prince of the planet Edenoi, homeworld of Alpha 5

, and the current Masked Rider: the guardians of Edenoi. As with all his race, he possesses a gem in his forehead that channels various powers, including broadcasting his memories into thin air.

Dex' grandfather, King Lexian, gave Dex the Masked Rider powers when the planet was attacked by Count Dregon - Dex' uncle, and a tyrant who coveted the powers for himself. While the planet fell, Dex continued to lead the resistance to his uncle's tyranny.

during a battle where he initially thinks they are working for Dregon. After a brief fight, the heroes team up to take down the tyrant's Plague Patrol and Cogwarts. The Rangers and Dex depart as friends but it is now clear that Dregon is turning his sights towards Earth and Dex needs to travel there to stop him.

As the current Masked Rider, Dex is sent to Earth to stop Count Dregon from enslaving the Earthlings. He is adopted by the Stewarts and tries to interact with American culture. Dex has many capabilities that Earthlings don't have. He can materialize a crystal on his forehead to transmit his thoughts to others, use it to scan and x-ray, and sense nearby danger, he can also emit a high pitched noise which can knock out nearby lifeforms. Dex has superhuman strength, super-speed, and telekinetic abilities. While trying to blend in, he appears unusual to everyone else. 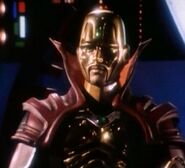 Dex's base form. His Masked Rider powers is passed down from his grandfather King Lexian. Masked Rider has a Rider Kick capable of greatly damaging monsters.

Dex's friend Donais from Edonoi was sent by King Lexian to give Dex the powers of Super Gold. The powers were stored in a powerful crystal, but Donais was kidnapped by Count Dregon. Dregon brainwashed Donais into a loyal servant and used the crystal to transform him into Robo Rider, forcing Dex to battle against his best friend. Dex eventually managed to undo Dregon's brainwashing and free Donais from his control, retaking the crystal and using it to achieve his Super Gold form.

In his Super Gold form, Masked Rider becomes highly durable and twice as physically strong, but suffers a great loss in overall mobility.

Donais later returned to give Dex the powers of Super Blue. These Powers can allow Masked Rider to liquefy his body to confuse and defeat enemies, in addition to providing a big speed advantage.