Detective Double was developed as part of a series of Heisei Rider Gashats by Genm Corp.. As part of CEO Kuroto Dan's ambition to gather the power of the legends preceeding his own Kamen Riders, they contributed to the completion of his Kamen Rider Battle: Ganbarizing.

A manifestation of Kamen Rider Double (仮面ライダーダブル, Kamen Raidā Daburu) was summoned along with OOO and Fourze from the Game Area generated by the Ganbarizing Gashat which had been installed into a Collabos Bugster by Kamen Rider Genm who, as Emu Hojo noted, controlled them like game characters. Advancing on Emu, the three Riders were held off by the sudden arrival of "Dr. Pac-Man", 「Part. I: Legend Rider Stage」 who fired at them with his Gashacon Bugvisor to cover his escape with Emu. Catching up with Emu and "Dr. Pac-Man" now joined by Hiiro Kagami and Taiga Hanaya, Genm's Riders met the three doctor Kamen Riders in a skirmish while Genm himself pursued "Dr. Pac-Man", with Double engaging Brave Quest Gamer before facing Ex-Aid Pac Action Gamer in a Game Area generated when the doctors used the Bandai Namco Gashats provided to them by "Dr. Pac-Man". Pursuing Ex-Aid just as the ghosts chased Pac-Man, the tables would soon enough turned on Double when Ex-Aid reached a Power Pellet which allowed him to fight back against Double who became a vulnerable ghost, ultimately defeating him with Pac Adventure's Critical Strike. 「Part. II: Legend Gamer Stage」

Double later appeared as part of a gathering of the first seventeen Heisei Riders which empowered Genm as he performed the Ganbarizing Critical Strike, defeating the three Riders with one Rider Kick. Returning to his lair, Dan announced to Parado, who had taken the guise of Dr. Pac-Man, that everything was proceeding according to plan as his assembly of Gashats was completed. 「Part. III: Final Legend Stage」 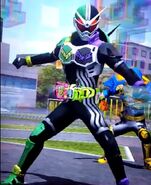