Destiny Reboot! (運命のreboot!, Unmei no Ribūto!) is the fortieth episode of Kamen Rider Ex-Aid. It features the revival and redemption of Parado and the new function of Gashacon Bugvisor II, Reset.

Parado has been defeated, and Emu has lost the ability to transform into Ex-Aid! Following Parado's annihilation, the other Riders team up in order to defeat Cronus. Brave, Snipe, Genm, and Lazer Turbo, all alternate the Hyper Muteki Gashat in order to counteract Cronus' Pause. Meanwhile, Emu was deep in thought. The fear of death that he felt at the moment of his extinction, even if he was a Bugster, he shared the same feeling as he did in that moment. Just then, Emu takes out the Mighty Brothers XX Gashat…

Masamune is standing in a flower garden humming a song as Hiiro, Kiriya, Taiga, and Kuroto surround him, here to destroy his Kamen Rider Chronicle master Gashat (though Kuroto opposes it). Masamune says the Riders will have new "actors" for the worldwide release to replace them, the group transforming into Cronus Chronicle Gamer, Brave Legacy Gamer Level 100, Lazer Turbo Proto Combat Bike Gamer Level 0, Snipe Simulation Gamer Level 50, and Genm Zombie Action Gamer Level X-0. Cronus kills Genm with Chainsaw Mode, Brave catching and using the dropped Hyper Muteki Gashat Emu had given back after losing his ability to transform, and fighting through Cronus' Pause to deactivate it. Genm snatches Muteki back to use it against another Pause, but Cronus uses an Invisible Energy Item, and as Muteki's ten seconds run out, Genm retreats with it so Cronus can't steal it, leaving Cronus to hit the remaining Riders with Critical Judgment. When Pause ends, they find their Gamer Drivers and Gashats gone, Cronus taunting them to become Ride-Players if they wish to challenge him again.

Back at CR, Poppy questions why Emu killed Parado instead of going after Cronus' Gashat. On the roof, Emu says his and Parado's hearts were connected, letting him feel Parado's fear, and triggers Mighty Brothers XX to become Ex-Aid Double Action Gamer Level XX L, XX R summoned as Parado, surprised to be alive. Emu explains that when he crushed Parado's heart in his hand, he actually reabsorbed him to save him from dying; he asks if Parado understands now how scary dying is, but Parado teleports out. Graphite finds him sitting in their hideout, but Poppy arrives. At Genm Corp., Masamune calls Johnny Maxima to report he has a Gamer Driver ready. Poppy explains that Emu wanted Parado to understand the fear of the people he erased; influenced by Emu, Parado had wanted to move past being just a character and become human with a real heart, evidenced by always talking about how racing his heart was. Graphite tries to shut her up and say that Bugsters must defeat humans, but Poppy asks what next? If Bugsters win against humans, the game is over, but she believes they can instead live in peace playing instead of fighting. Gripped by visions of drowning, Parado tells them both to stop and leaves.

Taiga visits Nico in CR's patient ward; she apologizes for joining Kamen Rider Chronicle, that instead of beating Parado, she thinks she just wanted to beat all the best players. Poppy also tells the other Riders that Parado is still alive. As Emu stands on the roof, Parado arrives. He tries to happily say he just wanted to play a game with Emu, that he erased other people to motivate Emu to play his hardest, and feels he was born to fight with him…but met with silence, he quickly derails into muttering that Lovelica's permadeath and him seemingly being killed made him so scared, collapsing to moan that he didn't understand the idea of lives without respawns and pleading for forgiveness. Emu believes Parado now understands the value of life and, feeling it's his responsibility to look after and redeem the effect of the game illness that's a part of him, offers Parado the chance to join him if he promises to fight to save lives instead of end them; in Parado's drowning vision, Emu dives down and reaches out to him. Parado grabs his hand, both in his vision and real life.

As Nico's infection spikes to the critical point, Hiiro and Taiga despair at being unable to help, Kiriya saying it's all up to Emu. Meanwhile, Masamune prepares to celebrate Kamen Rider Chronicle soon going worldwide, but Emu and Parado arrive to destroy his Gashat. They transform into Cronus Chronicle Gamer, Ex-Aid Muteki Gamer, and Para-DX Perfect Knock Out Gamer Level 99, Ex-Aid Stage Selecting them away. The three fight, Cronus using Pause but Ex-Aid kicking his Driver to disable it while knocking him into the path of Para-DX's Gun Mode shots. Para-DX uses Mighty Brothers XX in the Parabragun to simultaneously trigger Perfect and Knock Out Critical Finish, splitting into separate Puzzle and Fighter Gamers to surround Cronus; Cronus tries using a Giant Energy Item from his case, but Puzzle pulls all his Items away and tosses Confusion to him and Iron-Body to Fighter. Fighter hits him with an iron fist before Ex-Aid slams Cronus to the ground with his extending hair, Para-DX recombining. They use Hyper Critical Sparking and Perfect Knock Out Critical Bomber, hitting Cronus in midair and defeating him, the master Kamen Rider Chronicle Gashat breaking as the Game Area fades, Poppy celebrating and Kuroto lamenting from the sidelines. Faced with his perfect plan ruined by the existence of Hyper Muteki, Masamune decides to wipe it from existing; his eyes glow as he is covered in orange and green auras, his DNA morphing, and he hits the Bugvisor II's B-Button, the clock behind him speeding in reverse as the Bugvisor announces "Reset". The world blurs out and back in, the group realizing Hyper Muteki is gone and the master Chronicle Gashat is restored, wondering what this "Reset" could have done. 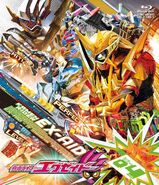 Retrieved from "https://kamenrider.fandom.com/wiki/Destiny_Reboot!?oldid=494059"
Community content is available under CC-BY-SA unless otherwise noted.