2017: Grand Climax!
The DenLiner (デンライナー, Denrainā) is a bullet train that serves as the main transportation system for the Den-O crew, for the purpose of traveling through time and launching attacks against Gigandeaths. The time-stream where the DenLiner resides can be accessed by holding a Rider Pass and passing through a door while the hour, minute and second of time are the same. It is able to travel to different times when a Rider Pass, along with a Rider Ticket that contains the date in which an Imagin has traveled to, is inserted into the DenBird, while docked in the DenLiner. The date then becomes DenLiner's new destination in time. Once passengers enter the DenLiner, they temporarily gain Singularity Point status if they weren't already born with it already.

The DenLiner docks are at the King Station which is also the actual KingLiner.

In the Rider War, DenLiner attacked Decade alongside ZeroLiner only to be quickly destroyed. They were presumably restored after the destruction (and subsequent revival) of Decade ended the Rider War and the worlds were restored.

During the 14 Heisei Kamen Riders' battle against Amadum's monsters in the World within the Magic Stone, when various giant and flying monsters appeared, Momotaros as Den-O boarded the DenLiner, fighting alongside the other Riders pulling off their various tricks and attacking the Mega Greeed. Neverending Story

The DenLiner was attacked by a Kuliner

which was sent by the Shadow Line's representative, General Schwarz

to aid the Badan Empire in its ambitions. Later, it helped the ToQgers

Summoned by the Goriders, the DenLiner, piloted by Momotaros as Momorider, is part of a team of five Kamen Rider and Super Sentai mecha which wipe out the Xevious fleet, allowing the Goriders to destroy the mothership Andor Genesis with the Rider Hurricane. Kamen Rider × Super Sentai: Chou Super Hero Taisen

The DenLiner has multiple forms, split throughout eight cars. When not using a certain form, DenLiner's eight cars are linked up, forming one large train. These railroad cars only disconnect and change form when Den-O is in the corresponding form. Form-specific cars can also link up with other cars in various orders to provide additional weaponry when fighting Gigandeaths. Furthermore, the DenLiner can link up with the ZeroLiner for more power. When Den-O enters Climax Form, DenLiner is affected by the power surge and enters Climax Mode (クライマックスモード, Kuraimakkusu Mōdo), turning a golden color with an intense fiery aura around it.

The DenLiner also has various non-combative cars that separate from the Gouka during battle and serve as settings for the television series and movies. These include the dining car where most of the series takes place, a bath car used several times late in the series, and the sleeping car where the group meets the Swan Imagin Sieg.

DenLiner Gouka (デンライナー ゴウカ（業火）, Denrainā Gōka) is based on the legend of Momotarō (the legend from whom Momotaros is based and is activated when Den-O is in Sword Form). This train is composed of cars 1 through 4, each with a unique attack that relates to a component of the legend. When attacking, the train turns sideways and each of the four compartments open up, each revealing a weapon.

DenLiner Isurugi (デンライナー イスルギ（石動）, Denrainā Isurugi) is a turtle-style train that is activated when Den-O is in Rod Form. Composed of car five, the back of the car is able to open to release a turtle-like machine named Radome (レドーム, Redōmu) that Den-O uses as a hovercraft to travel on water. Isurugi is also able to fire lasers from its front. Isurugi can also combine with Gouka, but instead of staying in the back, it attaches to the front. In addition to Gouka's usual weaponry, Radome sits on top Isurugi, extending two blade-like lasers when attacking, chopping a Gigandeath in half.

DenLiner Rekkou (デンライナー レッコウ（裂光）, Denrainā Rekkō) is an ax-style train that is activated when Den-O is in Ax Form. Composed of car six, five axes called the Side Ax (サイドアックス, Saido Akkusu) appear from each side of the train along with one large ax called the Front Ax (フロントアックス, Furonto Akkusu) on the head. Rekkou is a primarily close range offensive train. The five axes on the sides can strike through the Gigandeath with the whole train facing upward, chopping through the enemy multiple times, or hold the monster at bay to deliver a piledriver attack. Its most effective attack is when Rekkou's large ax on the front expands in length and Rekkou passes under the Gigandeath at full speed, slicing the target in half. It is also able to combine with Gouka, attaching to the front, which allows their weaponry to be combined. When combined with Ikazuchi, its axes on the side can create crescent waves shot at the Gigandeath.

DenLiner Ikazuchi (デンライナー イカヅチ（電雷）, Denrainā Ikazuchi) is a dragon-style train that is activated when Den-O is in Gun Form. Composed of cars seven and eight, the upper half is able to open up to reveal a dragon head while the rear half is able to reveal a dragon tail. The dragon's head is able to launch energy blasts and bite into Gigandeaths to fling them away. It is able to combine with all the other trains, forming a new DenLiner that contains eight cars, all in their respective forms. Ikazuchi's first car with the dragon head is in front, followed by Rekkou, Isurugi, Gouka. The end is the second part of the Ikazuchi, with the dragon tail (the Kanji names of these cars spell out "Lightning Speed" (電光石火, Denkōsekka)). Unlike other formations, Den-O stays atop of the dragon head with the Machine DenBird when fighting (in other formations, Den-O operates from within Gouka), performing a conjunction attack with a variation of his Wild Shot and a powerful bursting stream of energy from Ikazuchi's cannon. 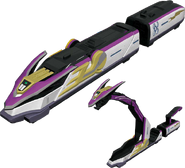 The New DenLiner (NEWデンライナー, Nyū Denrainā) is New Den-O's transportation system, a bullet train mainly used for traveling to other times. It is similar to the DenLiner, but is blue to match New Den-O's color scheme. Like the DenLiner, a DenBird is usually required for the train to move, though it can be substituted with an exercise bike.

The Nega DenLiner (ネガデンライナー, Nega Denrainā) is Nega Den-O's transportation system, a Shinkansen (bullet train), similar to DenLiner Gouka in appearance, but as in the style of Nega Den-O, it has tribal markings all over it. In comparison to DenLiner Gouka, the Nega DenLiner's second to fourth cars open up to reveal Gigandeaths. The first car is a laser cannon, the second holds two Gigandeath Hades that fire lasers, the third car holds a small Gigandeath Hell that launches bombs, and the fourth car holds Gigandeath Heaven.

The Den-O Ressha (電王レッシャ, Den'ō Ressha) is a variation of the DenLiner that utilizes the power of the 38th Super Sentai team Ressha Sentai ToQger

. Combined with the power of the Kyoryuger Ressha

as they form the feet/boots for ToQ-Oh. Prior to this creation, DenLiner Ressha replaces Red Ressha to form ToQ-Oh Den-O. However, Kyoryu Red proclaims that he's doing it wrong and literally knocks Den-O Ressha off the position.

Momotaros uses the callsign "Ore Gattai" (lit. "I have Combined") for this form and the finishing attack is the "Fumikiriken Brave Sanjou Slash", the other Liners racing in in a spiral formation and firing as ToQ-Oh Kyoryuzin feat. DenLiner races in and slashes.Heisei Rider vs. Showa Rider: Kamen Rider Taisen feat. Super Sentai

Episode 16 of Hayate the Combat Butler (ハヤテのごとく!, Hayate no Gotoku!) features cameo appearances by several characters and elements from Kamen Rider Den-O on a train very similar to the DenLiner Gouka.