watch 01:47
Wiki Targeted (Entertainment)
Do you like this video?
Play Sound

The Combination Armament DenGasher (連結武装 デンガッシャー, Renketsu Busō Dengasshā) is modeled after a bullet train and is the Den-O systems' primary weapon. The DenGasher is composed of four separate parts (Sword, Grip, Ax, Gun) that, when not in use, are attached to the Den-O Belt. Although the weapon configurations are not limited to a specific form of Den-O, there are certain combinations which function best with a corresponding form. Climax Form typically uses it in Sword Mode, although on rare exception he has used its other forms (such as the Gun Mode against the Armadillo Imagin). It is composed out of the super durable Den Metal (デンメタル, Den Metaru), a type of 'aura armor' (オーラアーマー, ōra āmā)

The following listed are the most commonly used ways to form each weapon, but each form also displays various variations in which the weapons are attached in fancy and tricky manners that differ from the norm. 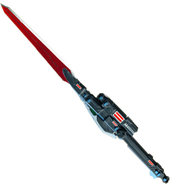 DenGasher Naginata Mode
Add a photo to this gallery

Den-O has five different Full Charge (フルチャージ, Furu Chāji) finishing moves, one for each form seen in the television series except for Plat Form. A Full Charge is started by swiping the Rider Pass across the Terminal Buckle, causing the Belt to charge up energy and transfer it into the Dengasher for a finishing attack. It is possible to increase the power of a Full Charge by swiping the pass multiple times.

The DenGasher is composed of the following parts:

Aside from New Den-O's duplicate DenGasher as well as all the identical DenGashers gifted to any Imagin who has a pass (totaling five), other Den-O-like systems are fitted with identical weaponry.

The DenGasher in Sword Mode is the Arms Weapon wielded by either an Armored Rider or a New Generation Rider when they transform into Den-O Arms, which is assumed by Kamen Riders Gaim and Baron in Kamen Rider Battle: Ganbarizing.

Baron Den-O Arms
Add a photo to this gallery

Episode 16 of Hayate the Combat Butler (ハヤテのごとく!, Hayate no Gotoku!) featured "guest" appearances of the DenGasher Sword, Rod, and Ax Modes as well as cameo appearances of other elements from Kamen Rider Den-O.

Add a photo to this gallery
Retrieved from "https://kamenrider.fandom.com/wiki/DenGasher?oldid=663762"
Community content is available under CC-BY-SA unless otherwise noted.