As one of the 16 Heisei Rider souls, Den-O Damashii's power is also channeled through the Heisei Damashii which is accessed by Ghost via the combined Kamen Rider 45 Ghost Eyecon. In conjunction with Hibiki, OOO and Gaim, it grants Ghost the power of enhanced swordsmanship. Last Chapter: 1 & Heisei

Created through unknown means, the Den-O Eyecon was among the first ten Heisei Rider Ghost Eyecons which were possessed by Freya. Gaim Chapter After having Kamen Riders Ghost and Specter collect the following six Rider Eyecons, she combined all sixteen into the Kamen Rider 45 Ghost Eyecon, Wizard Chapter which would later be used by Ghost to assume Ichigou Damashii as well as the combined Heisei Damashii, allowing him to defeat the revived Nova Shocker generals Urga and Buffal as well as the Alexander Dark Mind. Last Chapter: 1 & Heisei 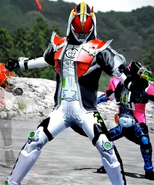 Necrom Den-O Damashii
Add a photo to this gallery

Den-O Ghost Eyecon
Add a photo to this gallery

Retrieved from "https://kamenrider.fandom.com/wiki/Den-O_Damashii?oldid=550090"
Community content is available under CC-BY-SA unless otherwise noted.