Deathmatch! The Monstrous Snowman vs. The Two Riders!

It sees the return of the first Kamen Rider, Takeshi Hongo, who last appeared in episode 13 before heading off to fight Shocker in Europe, leaving the protection of Japan to Hayato Ichimonji. This is the first appearance of Hiroshi Fujioka as Hongo following the motorcycle stunt accident which forced him to leave the show, having made his last full appearance in episode 10, with a combination of reused footage and a voice actor being used to fill in before Takeshi Sasaki was brought in to replace him in the lead. Thus, this marks the first time the two Kamen Riders appear and fight together.

Following the showdown with Colonel Zol in the previous episode, it introduces the new commander of Shocker's Japan operations, Doctor Death. It also features the introduction of two new allies, Emi and Mika, who assisted Hongo in Europe. 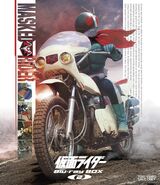 Retrieved from "https://kamenrider.fandom.com/wiki/Deathmatch!_The_Monstrous_Snowman_vs._The_Two_Riders!?oldid=564819"
Community content is available under CC-BY-SA unless otherwise noted.