Dark Shinji, also known as Dark Side Shinji (鏡像の真司, Kyōzō no Shinji) [1] is the primary antagonist in Kamen Rider Ryuki: Episode Final as well as the Mirror World duplicate of Shinji Kido. Transforming into Kamen Rider Ryuga (仮面ライダーリュウガ, Kamen Raidā Ryūga, Masked Rider Ryuga), he is one of the 13 Kamen Riders and resembles Kamen Rider Ryuki, but with a black look similar to Ryuki's Blank Form.

The Mirror World counterpart of Shinji Kido, he would adopt the identity of Kamen Rider Ryuga and join the Rider battle in order to pursue his goal of becoming a real person in the real world. He could survive indefinitely in his own universe without any extra protection, but could only stay in the real world for a short time before he started to disintegrate.

Ryuga was twice mistaken for Ryuki. Ren had seen Ryuga attack Kamen Rider Femme while out fighting a Hydragoon, and thought Shinji had come to understand the meaning of the Rider War. He then demanded that Shinji fight him. Miho first mistook Ryuga as Shinji when Ryuga saved her before Kamen Rider Ouja could kill her. Ryuga himself had destroyed Genocider and reverted Ouja into his blank form. Femme then finished Blank Ouja off.

Dark Shinji then attempted to take Miho's life. He first wanted to kill her when both of them were still untransformed, then they fought in the Mirror World. Ryuga summoned Dragblacker and had it severely wound her. Before he could deal the finishing blow, however, the real Shinji intervened and Dark Shinji left the battle. Miho would later still die because of her wounds inflicted by Dragblacker.

When Yui Kanzaki's life was coming to an end, Dark Shinji appeared from the Mirror World and absorbed the real Shinji into his body, finally "existing" as the self-proclaimed "strongest Rider". With his newfound body, he transformed into Ryuga and almost defeated Kamen Rider Knight in battle. The battle was interrupted, however, by the sound of Shiro Kanzaki screaming at the death of Yui, which caused Ren to leave and come to Shiro's place.

Just as Ryuga was about to deal the finishing blow to Ren (in his human form), the real Shinji inside him (upon seeing Yui's dead body) struggled and seperated from Ryuga. Ryuga would then plead with Shinji to merge once more, because if "they" become the winners of the Rider War, they could still save Yui's life. Shinji did not fall for the words of his doppelganger this time. As a result, Ryuga attempted to kill Shinji as the latter transformed into Ryuki.

A battle between the two Riders occurred with both combatants summoning their respective Contract Monsters to fight each other. At first, Ryuki seemed to have the upper hand as he punched Ryuga into the ground, but Ryuga later retaliated by punching Ryuki into the same building that Ren and Yui's body were at. They both then used their Final Vents, which resulted in an enormous explosion. In the end, Ryuga was defeated and assumed dead.

Kamen Rider Ryuki: World of If

In this S.I.C. alternate retelling of the story, the remaining Riders are Ryuki (now Ryuga), Knight, Tiger, Ouja and Odin.

After Shinji is possessed by Dark Shinji and becomes Ryuga, he goes on a mindless rampage in the Mirror World. Tiger shows up and tries to stop him only to be easily defeated by Ryuga in his Survive mode.

Hideyuki Kagawa, as Alternative Zero shows up with an army of twelve Alternatives in order to destroy Ryuga. As they prepare to attack Ryuga, Yui Kanzaki shows up. Kagawa laughs; Yui is the source of all their troubles and if she dies everything will end. They attack her instead, but Ryuga, having his sanity restored, shields her. He reverts to Shinji and dies.

Kamen Rider Ryuga is not seen with other Riders but he summons Dragblacker to supports the rest of Kamen Riders commanded by Wataru Kurenai, but all are murdered by Decade in episode 1 of Kamen Rider Decade in the dream of Natsumi Hikari and then conclude the dream with Decade as only Rider in the Rider War. Rider War

In the World of Faiz, after Daiki takes Tsukasa's Ride Booker, Narutaki takes advantage of the situation as he takes Tsukasa into another dimension to be killed by Kamen Rider Ryuga. However, after interrogating Kiva-la on Tsukasa's whereabouts, Daiki intervenes while claiming it was to get the Faiz Gear as he gives Tsukasa back the Ride Booker.

In the special version of episode 31, Kamen Rider Ryuga is not seen, but participates as one of the many Kamen Riders who fought in the Rider War against Decade and were all destroyed. They were presumably restored after the destruction (and subsequent revival) of Decade at the end of the Rider War and the worlds were restored.The Destroyer of Worlds

Kamen Rider Ryuga was part of a group of reinforcement riders led by Akira Date/Kamen Rider Birth to aid the primary riders in defeating the Rock Great Leader. All the Kamen Riders got on their bikes and performed the All Rider Break attack which destroyed the Great Leader. OOO, Den-O, All Riders: Let's Go Kamen Riders

Kamen Rider Ryuga appears as a toy, when Sento Kiryu and Sougo Tokiwa they find Ataru Hisanagahe brings them to his room which is filled with Kamen Rider memorabilia, with Sougo and Sento stunned to see toys of themselves. Ataru reveals that Kamen Riders are fictional.Kamen Rider Heisei Generations FOREVER

Kamen Rider Ryuga appears cited as an example of the riders that are portrayed by the suit actor Jiro Okamoto with Caucasus, G4, Odin, Nega Den-O, Leangle and Black. Later he does not appear in the quiz with the other Riders.

Transform! Ryuki is a Changing Cut!!

Kamen Rider Ryuga appears with Kamen Rider Ouja at the end of the episode, in the Mirror World to fight against Gunji Koriyama, the temporary user of the Kamen Rider Ryuki powers.

Kamen Rider Ryuga appears in the video game with the other Kamen Riders of the Heisei Era, in Kamen Rider Climax Heroes OOO.

Kamen Rider Ryuga appears as a playable character in the video game with the other Kamen Riders of the Heisei Era, in Kamen Rider: Super Climax Heroes.

Kamen Rider Ryuga appears as a playable character in this video game with other Kamen Riders and Monsters in Kamen Rider Gabanrider.

Kamen Rider Ryuga appears as a playable character in this trading card game with other Heisei era and Showa era riders.

Kamen Rider Ryuga appears as a playable character with the other Heisei and Showa kamen Riders in Kamen Rider Riderbout.

Kamen Rider Ryuga appears as a playable character with other Riders and monsters in Kamen Rider Break Joker.

Kamen Rider Ryuga appears as a playable character in Kamen Rider Batton-Line among other Riders in the game.

Kamen Rider Ryuga appears as a boss in the video game Kamen Rider: Battride War II, with Mirror Monsters as a Mid Boss, against Kamen Rider Ryuki. They both used their Final Vents, which resulted in an enormous explosion. In the end, Ryuga was defeated and assumed dead. 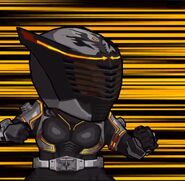 Kamen Rider Ryuga appears as a playable character with others Kamen Riders in the video game, performer his Dragon Rider Kick against his enemies Kamen Rider Transcend Heroes.

Kamen Rider Ryuga appears with other Kamen Riders and Monsters in Battle Spirits.

In terms of character, Ryuga was the exact opposite of his real world counterpart. While the real Shinji was kind and innocent, the Mirror World version was cruel and scheming. He was responsible for the death of Kamen Rider Femme, mortally wounding her during their fight. Near the end of the movie, he met his own fate at the hands of his real world counterpart when, after a climatic showdown, the two Riders' Final Vents collided, with Ryuki surviving while Ryuga seemingly perished.

Dark Shinji is a balanced fighter much like his real world counterpart. However, being Shinji's exact opposite, Dark Shinji is more fierce and calm while also retaining Shinji's unpredictable wit. Dark Shinji fights and goes directly for the kill without any hesitation. He does not "play around" with his opponents much, which allows him to quickly make short work of Femme and (indirectly) Ouja, as well as overpower Knight without much effort. Unlike his real world counterpart, Dark Shinji frequently makes full use of his Contract Monster - Dragblacker - to overwhelm his enemies in battle.

Kamen Rider Ryuga is a dark, Mirror World version of Ryuki. He is contracted to Dragblacker, a dark version of Ryuki's Dragreder. His Visor, the Blackdragvisor (ブラックドラグバイザー, Burakku Doragu Baizā), is equipped on his left arm. Dark Shinji can transform into Ryuga either on his own or while possessing Shinji's body. Like Ryuki, Ryuga's parameters are balanced. However, they are heightened to the point where Ryuga is the strongest out of all of the 13 Riders, with the exception of those using a Survive Advent Card.

By using his Final Vent, Ryuga can execute his finisher, the Dragon Rider Kick (ドラゴンライダーキック, Doragon Raidā Kikku), in which he jumps into the air with Dragblacker flying behind him. Dragblacker then breathes dark blue fire at Ryuga, propelling him into a flying kick that strikes the enemy.

This form is exclusive to S.I.C. Hero Saga Kamen Rider Ryuki Edition: World of If.

"Another Time! Ryuga!"
―Transformation announcement in the Ziku-Driver's right-hand slot[src]

Retrieved from "https://kamenrider.fandom.com/wiki/Dark_Shinji?oldid=683584"
Community content is available under CC-BY-SA unless otherwise noted.