I'm Not Your Friend

"Yes, yes. That, that ."
―Daisuke when Gon completes his sentence for him.[src]

He is a new and inexperienced Rider, lacking the knowledge about Worms. He is not a member of ZECT and is often a target of their attacks because of this. He also acts rather impulsively. Daisuke does not wish to be a Rider. He only transforms in order to protect himself, Gon, or women. When Gon is kidnapped by Shun Kageyama (the third Kamen Rider TheBee), Daisuke goes to all lengths trying to save her. He was blackmailed into fighting Kabuto, and became the first Rider who managed to deal some trouble to Kabuto. He eventually is helped by Tendo, Kagami, Hiyori and Yuzuki. During his quest to save Gon, he meets a woman whom he later discovers is Gon's mother. Daisuke meets the woman to return Yuriko Takayama (Gon's real name) to her mother Junko, but was interrupted by the Viella Worm, the same Worm that attacked Junko and Yuriko, causing the amnesia. Daisuke protects the mother and daughter, but was separated from Gon during the commotion. Daisuke defeats the Viella Worm, but only before Gon regains her memories as Yuriko, completely treating Daisuke as a stranger. He leaves for an unknown destination after the Gon incident, and after a long absence, returns in Episode 25.

Drake, along with Kageyama as Kamen Rider TheBee, was the first Rider to utilize the full body Put On system. They both performed this to try and defeat the Uca Worm, but she still defeated them. It is revealed that he is suspected of being the murderer of a rival make-up artist and is being pursued by the police. In addition, there are multiple clones of him running around the city. A Worm imitating Daisuke fakes its death in human form to convince the other Riders that the real Daisuke is a Worm. After losing to the other four Riders, Daisuke lost the Drake Glip. Kageyama made it look like he was returning the Grip to Daisuke, but the Acarina Worm Amber instead takes the Drake Glip while disguise as Kazama and transforms with it. After Kabuto knocks the Drake Zecter Gun out of the Worm's hand, the Zecter flees, undoing the transformation, and Gon retrieves the Grip, returning it to the real Daisuke, who defeats the Worm. With this incident, Drake joins the battle against the Worms and acknowledges Gon as his "aibo" (translated into "partner" even though he couldn't remember the term). The Worm was left-handed while the real Daisuke was right-handed.

Gon gave the Drake Glip to Tendo during episode 33. At first Tendo thought that Daisuke had given up the Drake Glip without a fight, but Gon reveals that she took it without permission. If "the man who walks the path of heaven" says it must be done, then it must be done. Tendo then uses the grip to call upon the Drake Zecter, catching it with one finger. After Tendo released the Zecters he had once collected, Daisuke returns after a long absence and meets Rena Mamiya after her memory was erased by Tendo due to the Hyper Sting attack. He meets Rena several times, and they seemingly fall in love, with Daisuke helping her all the time. Even after remembering that Rena was a Worm, he says that the Rena currently is not a Worm, but a changed person. His fury driving him, he brings out his reacquired Drake Glip and assaults Tendo, only to be disturbed from their fight when another Worm attacks Rena. Although Daisuke strives to protect Rena from the Riders and Worms after her, he ultimately fails after saving her from Kamen Rider Punch and KickHoppers. Their extended battle triggered Rena's Worm memories once again, returning her to the evil creature she once was. Her human half fights for control however, and so she injures Daisuke but heals him back all the same.

Daisuke, having a kind heart, asked what was her dream when she was a human, hoping to make it come true. He knows Rena is a Worm, but decides to protect her all the same, saying that she isn't pure evil. Working together, Daisuke manages to get Rena to perform on stage, making her dream of holding a concert come true, albeit not having an audience. Rena then tells Daisuke, after all this is over, he needs to make the right choice and destroy her, for she can no longer live as a human without endangering others. Daisuke, faced with a tough decision, makes a heart-paining choice and destroys Uca Worm by shooting a Clocked Up Rider Shooting at her, sending her to a regular speed Rider Shooting that he fired earlier. He held her in his hands as she died, once again with a human heart.

Drake makes a brief appearance in episode 45, fighting the massive onslaught of Worms that have begun to appear all over the city. Daisuke makes one final appearance in the epilogue, and although no longer a Rider, he is still the same outgoing person he always was. Daisuke continues to travel with Gon, who now insists on being called by her real name, Yuriko.

Kamen Rider Drake with the other Riders appear when Natsumi remembers the dream of the Rider War. The dream ends with the shock of fists between Decade and Kuuga. The World of Kuuga

After Yusuke saves Tsukasa from Delta's attack, while Gills is about to fight when he is overcome by pain when the Taurus Ballista, Formica Regia, and Lords appear to try to kill him, easily defeating Kamen Rider Drake and Delta. Awakening: Tornado of Souls

In the special version of episode 31, Kamen Rider Drake is seen as one of the many Kamen Riders who fought in the Rider War against Decade and were all destroyed. They were presumably restored after the destruction (and subsequent revival) of Decade at the end of the Rider War and when the worlds were restored. The Destroyer of Worlds

Kamen Rider Drake was part of a group of reinforcement riders led by Akira Date/Kamen Rider Birth to aid the primary riders in defeating the Rock Great Leader. All the Kamen Riders got on their bikes and performed the All Rider Break attack which destroyed the Great Leader. OOO, Den-O, All Riders: Let's Go Kamen Riders

Kamen Rider Drake appears with Kuuga, Kiva Emperor, and Blade Jack form. According to Urataros, Drake is considered a perfect boyfriend if you are a young lady.Type17. - You're Great, Hell Bride!

Kamen Rider Drake appears with Raia, Dark Kiva, and Double. According to Kivat-Bat the 3rd ,Drake is considered a least compatible match.Type21. - Get it! Can You Ready the Muffler Too!?

Type35. - I Like the Mystery of the Final Vent!

Kamen Rider Drake appears with Stronger, Imperer, and OOO Takatorata combo. According to Kivat-Bat the 3rd, Drake is considered a perfect candidate recommended for marriage.Type35. - I Like the Mystery of the Final Vent!

Type45. - Get it! The Crosshorns to the Future

Kamen Rider Drake Rider Form appears with Sasword, Kuuga, and OOO Takagoriba combo. According to Kivat-Bat the 3rd, Drake is considered a least compatible match. Type45. - Get it! The Crosshorns to the Future

Kamen Rider Drake appears with the other Kamen Riders in the Kamen Rider Kabuto video game, in his Masked and Rider Form.

Kamen Rider Drake appears only in his Rider Form alongside the other Zecter Riders in Kamen Rider Super Climax Heroes with his Double Rider Shooting during his last encounter with Rena as his finisher. He also performed his Make Up skill when using Clock Up as one of his attacks.

Kamen Rider Drake appears as a playable character with the other Riders and monsters in Kamen Rider Break Joker. 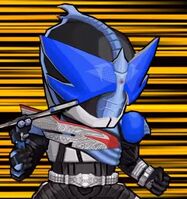 Kamen Rider Drake is a playable character in Kamen Rider Buttobasoul, among other Riders. 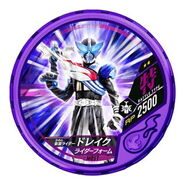 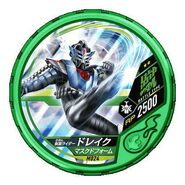 Daisuke is a free-spirited and eccentric man. He idolizes women, describing them as flowers and jumps at any opportunity to help a woman. This trait, however, has caused him to make false decisions and has almost cost him his own life on more than one occasion. At one point, Tendo, and even Gon has to call him out on being so naive on women. Daisuke views himself as the wind, refusing to be tied down to anything. As a result, he sleeps in parks and refuses to join any organizations, like ZECT.

Despite his womanizing nature, he is shown to be a generous person, as shown when he first meets Gon, who continues to accompany him ever since and often completes his sentences. Daisuke is willing to go any lengths trying to save her, as shown when Kageyama kidnaps her and blackmails him to fight Kabuto, who would eventually become the first Rider for him to ally with. He and Gon share a strong bond, as even after Gon remembers her past and reunites with her mother, she still comes to his assistance, and he still stops at nothing to protect the young girl.

Although he comes into contact with women regularly, the only time he actually loves is when he meets an amnesiac Rena Mamiya (who is also the Executive Uca Worm). His generosity even helps her secure her dreams. Upon discovering her identity as a Worm, his love for her does not change, he even says he does not care whether she is human or Worm. Daisuke eventually has to face a tough decision to kill Rena, who is willing to die by Drake's hands, to not endanger anymore lives. When she dies, he holds her in his arms in grief and sorrow.

Drake's Masked Form (マスクドフォーム, Masukudo Fōmu) is a heavily armored form resembling a nymph that has very little offensive capabilities. This is the default form until Daisuke pulls a trigger on the end of the Drake Zecter, initiating the Cast Off (キャストオフ, Kyasuto Ofu) command. Drake's Masked Form also has significant underwater capabilities.

Drake's Rider Form (ライダーフォーム, Raidā Fōmu) is the sleeker, faster, and more offensive form of Drake that completely resembles the dragonfly motif. In this form, Drake has access to the Clock Up (クロックアップ, Kurokku Appu) command which allows Drake to travel at near-light speeds to match the speeds of the Worms. By folding back the wings on the Drake Zecter (the top halves forming a "scope" that can be used for targeting), Drake activates the Rider Shooting (ライダーシューティング, Raidā Shūtingu) attack.

Retrieved from "https://kamenrider.fandom.com/wiki/Daisuke_Kazama?oldid=683608"
Community content is available under CC-BY-SA unless otherwise noted.