I Won't Give Up These Lives

During the fourth Workplace Competition, Daiki secretly assists Gai without his acknowledge, due concern over ZAIA's first loss. He took a Raidriser and the Scouting Panda Progrisekey to become the Scouting Panda Raider. At the fire house competition, Daiki triggered an explosion in the building, causing a real fire and managed to escape Aruto Hiden, who spotted and attempted to pursue. Firefighters Battling The Blaze

As the competition took a turn for the worse, the Raider hid in a nearby building until Aruto, transformed into Zero-One Rising Hopper, tracked him down in a nearby parking garage, forcing the Raider to open fire. After Zero-One dodged the blast and transformed into MetalCluster Hopper, the Raider attempted to fight but lost to Zero-One's rider slash, canceling Daiki's transformation. Daiki managed to escape, but dropped his ZAIA Spec, which was back to him by A.I.M.S. agent Isamu Fuwa. After the competition fire was settled, Isamu brought Daiki to Aruto, Gai and Yua Yaiba, forcing Daiki to reveal his plan to assist Gai in the workplace competition, but also revealed that ZAIA created the Raidriser and Gai's plans for a weapons race, which forced the ZAIA president to engage Fuwa in their Kamen Rider forms, also allowing Daiki to escape. I Won't Give Up These Lives

"Raidrise! Scouting Panda! There is nothing unknown to his eyes."
―Transformation announcement via Raidriser[src] 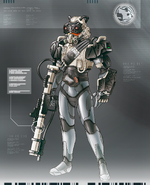 Retrieved from "https://kamenrider.fandom.com/wiki/Daiki_Kyogoku?oldid=661631"
Community content is available under CC-BY-SA unless otherwise noted.