The Deluxe Henshin Belts (DX変身ベルト, Derakkusu Henshin Beruto), often marketed as DX Henshin Belts, are a series of mid-level priced toys based on the transformation belts of the Kamen Rider TV series.[1][2] A higher quality version produced by Bandai is the Complete Selection Modification line.

While simple and minimalistic by today's standards, the toys were innovative in their era as they had motorized flashing lights that accurately simulated a belt's activation sequence during transformation and were made with die cast chrome around the buckle. The series was discontinued after Popy was absorbed back into Bandai and the toyline was succeeded by a Bandai toyline with a similar name. To date, Bandai has only reproduced the Typhoon from their predecessors.

Due to the quality of the toys and versatility of features for the belts, the DX line is considered the flagship of the Bandai belt toy-lines and is the most popular, holding record sales in some cases and being the winner of several Japan Toy Awards.[3][4][5][6]. 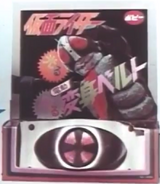 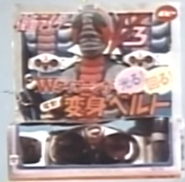 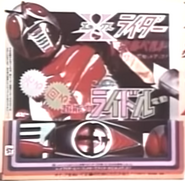 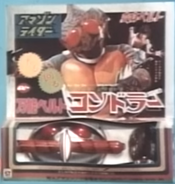 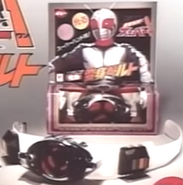 Besides transformation belts, the DX label also covers toys of various weapons and other transformation trinkets used by the Kamen Riders. Some of the toys later in this line would have trinkets exclusive to a respective toy that activate hidden sound functions of the DX Belts, thereby necessitating the buyer's need to collect them all to get the full functionality of the belts.