Cyclone (サイクロン号, Saikuron-gō) is a machine given to Kamen Rider by Professor Midorikawa. Cyclone takes the form of an off-road bike and can be ridden by people other than Hongo. When Hongo transforms into Kamen Rider the switch for the bike is also activated and the bike becomes an on-road bike.

A lighter remodeled version of Cyclone is introduced in Episode 14, however it's given to Hayato Ichimonji since Hongo had already left the country. In episode 40 when Rider 1 goes to save Rider 2, Cyclone has a similar form to Rider 2’s Cyclone. It’s assumed that Cyclone was upgraded while he was overseas.

In Kamen Rider The First, Cyclone's base design is the Honda CBR1000RR, and modified by his mentor Tobee Tachibana. He rides Cyclone even in human form or rider form.

Hongo returned to Japan with a modified original Cyclone, rather than the New Cyclone, using its maneuverability to fight against Shocker's experimental tank alongside the other seven Riders. Tank and Monster the Second Generation Corps, Full Force of Eight Riders

In his later appearances during Skyrider, he also rode into action with Cyclone, using it for seemingly the last time. Eight Riders' Great Training of FriendshipEight Riders vs. GingaOhFarewell, Hiroshi Tsukuba! Eight Heroes Forever....

Rider 1 appears riding Cyclone and New Cyclone in Kamen Rider: The Bike Race, a racing game featuring the majority of Kamen Riders and Rider Machines up to Kamen Rider Agito. 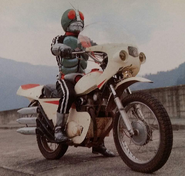 Retrieved from "https://kamenrider.fandom.com/wiki/Cyclone_(Rider_1)?oldid=618565"
Community content is available under CC-BY-SA unless otherwise noted.