Who Does the Warrior Fight For?

The Cure Quicker (キュアクイックカー, Kyua Kuikkā) is a Tire Specific Item modeled after a first aid kit with a stethoscope-like attachment called the Pain Scope (ペインスコープ, Pein Sukōpu) that is wielded by Kamen Rider Drive when he uses the Shift Mad Doctor Car to activate the Mad Doctor Tire, which can also be combined with the Justice Hunter and Fire Braver Tires to create the People Saver Tire via Type Tridoron's Tire Blending ability.

It can also be accessed by Kamen Rider Mach if he inserts the Shift Car into his Mach Driver Honoh to activate the Kourin Signal Naorl.

The Cure Quicker can be used to heal injuries, poisoning, and even heat stroke. If Drive initiates a Full Throttle, the Cure Quicker will make him hover in the air as medical equipment appears from it to surround him and remove whatever ailment is affecting him, such as poison. However, during the healing process, Drive will experience excruciating pain. Deadheat Mach's version removes the floating portion of the healing.

If Drive initiates this Full Throttle on a civilian, the syringes from the Cure Quicker will instantly heal said civilian painlessly. Who Claimed the Life of Eisuke Tomari? Who is Aiming for the Ultimate Taste?

At one point, the Cure Quicker is used to attack Heart in his Over Evolved State, but whether it caused healing or damaged him is unknown as the next frame showed Drive trapping Heart with the Justice Cage. When Will the Whirlwind Kidnapper Attack?

Poisoned by the Roidmude Brain, Shinnosuke Tomari was assisted by Kiriko Shijima in assuming Type Speed Doctor to receive treatment. Though Mad Doctor and the Cure Quicker were able to quickly cure Shinnosuke of the affliction, the treatment proved extremely painful. Who Does the Warrior Fight For? 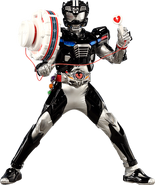 Retrieved from "https://kamenrider.fandom.com/wiki/Cure_Quicker?oldid=552851"
Community content is available under CC-BY-SA unless otherwise noted.