A crack (クラック, Kurakku) is a dimensional tear in the fabric of space which connects between the Human World and Helheim Forest. Cracks can be controlled or stabilized by devices of the Yggdrasill Corporation and be used to transport researchers into Helheim. Lockvehicles can transport Riders to Helheim by generating cracks and a Rider's Armor Parts are summoned through cracks via a Sengoku Driver or Genesis Driver.

However, random cracks appear across Zawame City, which stay open for an unknown amount of time. These random cracks are a dangerous phenomenon which causes Inves to crossover into the Human World and attack civilians. An additional side effect of their appearance is the surrounding environment having various flora native to Helheim to appear in an area in proximity of the crack, occasionally including Lockseeds.

These random cracks close after a certain period of time, making an additional danger of having Inves trapped in the Human World or humans getting trapped in Helheim.

The Yggdrasill Corporation tried to conceal the existence of these random cracks by having Kamen Rider Zangetsu destroy any Inves they find, the field operatives burning all the plants in the area and presumably, silencing any witnesses who see them. The true reason of keeping this secret is to avoid panic among the citizens and prevent any potential repercussions of the company's experiments in Helheim and the Inves Games. As the Inves spread a disease that causes painful plant-like growths to appear on their victims and premature Lockseeds have an unknown mutagen which transforms humans into Inves when they are consumed by them.

Following the failed attempt by the major governments to destroy Zawame City in order to eliminate the Helheim threat, the supreme Over Lord Inves, Rosyuo, opened cracks all over the world to speed up humanity's extinction. Mitchy's Ark When Kouta Kazuraba inherited Rosyuo's power as the Man of the Beginning, he chose to save humanity and preserve the world by sending all the Inves and Helheim flora on Earth through a giant crack leading to a distant planet at the edge of the universe. Fate's Victor

Cracks resemble silver clothing zippers and even have the sound of one when opened using a Driver or activating a Lockseed in an Inves Game. Lock Vehicle cracks open and close like a flower blooming.

Cracks that open from the Sengoku Rider War Period resemble a ribbon & string like warlords wear.

Thanks to the creation of the Fifteen Lockseed, Ren Aoi is capable of creating a darker version of the natural Helheim cracks. It is visually similar to the natural ones, but the zipper was made out of human bones, and it opens up in an uneven manner.

The crack created by Another Gaim appeared to be made out of wood.

A crack opens as Gaim changes his transformation Arms.

A crack opens in Helheim Forest during Gaim's transformation.

The special crack of the Legend Riders Armor Parts.

A special crack opened for the Yomotsuheguri Armor Part.

A special crack opened for Kaito Kumon, revived by Megahex.

A Crack opened for Kamen Rider Ex-Aid Gaim Gamer Level 2, created by the Toukenden Gaim Gashat.
Add a photo to this gallery

During an Inves Game, two or more cracks appear which summon Inves into the ring for battle.
Add a photo to this gallery

A stable crack in the basement lab of Yggdrasill Tower. The scientists of the Yggdrasill Corporation use this as a portal to Helheim for research, with Takatora Kureshima overseeing the project. The crack eventually closes when Sid destroys the basement. 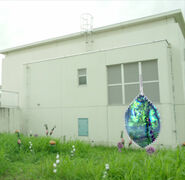 A random crack from episode 1.

The crack that the Grasshopper Monster uses to traverse between the two universes.

A crack connected the universe and the earth

A crack created by Another Gaim

Another Gaim summons Elementary Inves
Add a photo to this gallery

The crack that connects the Sengoku War World with the Human World.

The crack that connects the Sengoku World War and Helheim Forest.

Kamen Rider Fifteen walks into a crack created by his armor's powers. It has a bone-like zipper as opposed to the silver zipper of a normal crack.

14 of the Showa 15 Riders fallen down from the circle crack.

14 of the Heisei 15 Riders fallen down from the circle crack.

Megahex' cybernetic (snowflake-shaped) crack.
Add a photo to this gallery

Retrieved from "https://kamenrider.fandom.com/wiki/Crack?oldid=618549"
Community content is available under CC-BY-SA unless otherwise noted.