Control, a Birthday Party, and the Disappearing Ankh

Control, a Birthday Party, and the Disappearing Ankh (支配と誕生会と消えるアンク, Shihai to Tanjōkai to Kieru Anku) is the fortieth episode of Kamen Rider OOO.

As Yumemi becomes a police-state controlled by the Shimoda family and their Yummy, Eiji tries to prove to Ankh on whether or not he is still needed around.

Though reluctant for his well-being, Eiji allows Ankh to latch unto Shingo's body as they find the police under the Shamo Yummy's control and enforcing Shimoda's controlling laws. Later, at the Cous Coussier, Eiji apologizes to Hina for getting Shingo hurt as Ankh refuses to release his hold. Though she has not changed her mind, Hina instead asks Eiji what he would do and he answers that he would get rid of Ankh if it meant saving Shingo. Deciding to track down the Shamo Yummy, Eiji and Ankh find themselves faced by the police as they are ordered to be evicted from the neighborhood and the restaurant to be shut down. After Eiji's attempt to convince the police not to shut down the Cous Coussier, which Chiyoko ruins by attacking the cops, he and Ankh track down the Shamo Yummy's host to the Shimoda residence with Shintaro covering their escape. Deciding to wait out the Yummy in hopes of finding its source of nourishment, Shintaro sends out Candroids to keep an eye on the Shimoda residence. Forced to spend the night under a bridge, Eiji and Ankh talk about recent chain of events before Hina arrives with Ankh grabbing her by the throat. However, Ankh finds that he can no longer bring himself to harm Hina as Chiyoko joins them in camping out and celebrating Ankh's "birthday". The next day, Eiji realizes that the Yummy's food is the video camera footage of the ordered neighborhood. The Candroids then proceed to take out the cameras with the Shamo Yummy emerging from the Shimoda residence to stop them. After warning Ankh not to endanger Shingo, Eiji arrives on the scene as he and Shintaro assume their Kamen Rider forms. However, the two are at a disadvantage until Erika Satonaka arrives to even the odds as Kamen Rider OOO assumes Latorartar Combo to destroy the Shamo Yummy. Things return to normal soon after as Hina gives Ankh a present meant for Shingo. However, Eiji and Hina find Ankh ambushed by Ankh (Lost) who reveals that his scheme was for Ankh to let his guard down once the Shamo Yummy was destroyed. Ankh (Lost) then finally absorbs him despite Eiji and Hina's attempts to stop it, with Shingo out cold while Eiji and Hina witness the birth of a complete Ankh.

Kamen Rider OOO Volume 10 features episodes 37-40: Sleep, One Hundred Million, and the Birth Transfer, Circumstances, Farewell, and a Tearful Birth, The Nightmare, Security Cameras, and Ankh's Revenge and Control, a Birthday Party, and the Disappearing Ankh. 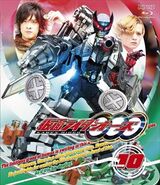 Retrieved from "https://kamenrider.fandom.com/wiki/Control,_a_Birthday_Party,_and_the_Disappearing_Ankh?oldid=491185"
Community content is available under CC-BY-SA unless otherwise noted.