Yuusuke comforts Nana when she tries to help her understand the means to be an actor in regards to an exercise associated with the Gurongi massacres. 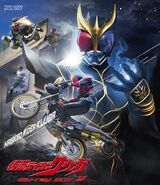 Retrieved from "https://kamenrider.fandom.com/wiki/Control?oldid=586647"
Community content is available under CC-BY-SA unless otherwise noted.