The Virgo Zodiarts begins attacking other members of the Kamen Rider Club, scaring them away from the club, blocking Fourze from accessing Cosmicstates. However, Tachibana arrives on Earth to show Gentaro a way to fight with other abilities at his disposal.

With only two Horoscopes left to find, and no longer needing to conceal himself through his Zodiarts form, Emoto offers his services in dealing with the Kamen Rider Club as Gamou transforms into the Sagittarius Zodiarts while explaining that he will deal with them if Emoto fails to get the job done. After three days of searching for Tomoko with no avail, the Kamen Rider Club receives a call from Tachibana that Tomoko may have been eliminated by the Horoscopes.

He adds that only Kengo and the Kamen Riders should continue the fight, encouraging the others to leave while Tachibana advises a means for Gentaro to find a way to fight use the Cosmic Switch without the power of friendship. The next day, Shun, JK, and Miu are terrorized by the Virgo Zodiarts as he intimidates them before appearing in Mr. Ohsugi's class to go after Yuki. He easily defeats Kamen Riders Fourze and Meteor while telling Yuki to leave the Kamen Rider Club or be killed, while also admitting that he sent Tomoko to the Dark Nebula before leaving.

As Kengo fails to track the enemy with Nuggeropa to discover his identity, Gentaro accepts Miu's, Shun's, and JK's wishes to leave the club out of fear for their lives and those dear to him as Kengo tells a troubled Yuki that it is okay if she leaves too. With only three members left, the Kamen Rider Club wonders what to do when suddenly Tachibana arrives in person offering to help. He asks Gentaro to transform into Cosmicstates. The transformation fails as (just like when JK left Kamen Rider Club before) Cosmicstates cannot work unless all members of Kamen Rider Club are present. Tachibana proceeds to train Gentaro in a life or death scenario, in order to learn him how to master Cosmicstates under his own power. 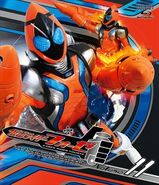 Retrieved from "https://kamenrider.fandom.com/wiki/Club_Collapse?oldid=581255"
Community content is available under CC-BY-SA unless otherwise noted.