Clash! The Over Lord King

Clash! The Over Lord King! (激突!オーバーロードの王, Gekitotsu! Ōbārōdo no Ō) is the forty-first episode of Kamen Rider Gaim. This episode features both Rosyuo and Redyue meeting their demise, as well as an appearance from the spirit of the Over Lord Queen.

Kaito fights with Mitsuzane but the two are disrupted by Ryoma. Meanwhile, Mai talks to Rosyuo and is entrusted with the Forbidden Fruit before entering a fight against Kouta and Kaito.

When Duke informs Kouta and Kaito that Mai is under Rosyuo's custody, they rush to the Helheim Forest to rescue her, while Bravo and Gridon appear to fight Mitsuzane in Kaito's place. Duke also leaves to the forest as well, where Rosyuo laments that he has failed to save his race even after his wife entrusted the Forbidden Fruit to him, and Mai comforts him by affirming that her faith in him was not misplaced, as he did what he could. Rosyuo then transfers the Golden Fruit to her body and sends her back to the human world, just before Kaito and Kouta appear to fight him. Meanwhile, Zangetsu Shin overpowers both Bravo and Gridon, who take the opportunity to flee, and Redyue mocks Mitsuzane, claiming that his plan of entrusting Mai to Rosyuo may backfire on him should he take an interest in her.

Transforming into Kachidoki and Lemon Energy Arms respectively, Gaim and Baron are overpowered by Rosyuo, and while Kaito becomes too weak to continue, Gaim transforms into Kiwami Arms to keep fighting the Over Lord King, who destroys the Kachidoki Lock Seed and defeats Kouta, but recognizes his efforts, with Duke watching the battle from the sidelines. However, Redyue takes advantage of Rosyuo's distraction to attack him from behind and kills him, but is distraught upon learning that he does not possess the Forbidden Fruit anymore.

Enraged for her acts of treason, Kouta's Over Lord powers emerge, allowing him to restore the Kachidoki Lock Seed and transform into Kiwami Arms once again. Mastering the power to control the forest to his favor, Gaim destroys Redyue once and for all with an Orange Charge from the DJ Gun. Upon realizing that the Golden Fruit is with Mai, Kaito, Kouta, Mitsuzane, and Ryoma rush back to Zawame City. Sagara then pays his respects to the spirit of the deceased queen, who appears to reunite with her husband in the afterlife. 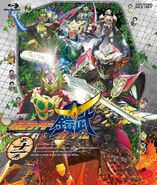 Retrieved from "https://kamenrider.fandom.com/wiki/Clash!_The_Over_Lord_King?oldid=495795"
Community content is available under CC-BY-SA unless otherwise noted.