Complete Works (超全集, Chōzenshū), later named Chozenshu for Heisei Phase 2, is a set of encyclopedia books published by Shogakukan from Kamen Rider Black RX onward, usually come out in few months after series' end. As the name implies, the encyclopedia books give extensive detail on various Kamen Riders and Rider forms throughout the franchise, as well as various monsters of the week and other assorted characters. Each book has images, details, cast interviews about a specific series, with the exception of Kamen Rider Black & RX, Kamen Rider and Kamen Rider V3 which are all in one books. Some Heisei Rider books have more than one volumes.

From Ex-Aid onward, every Chozen have a Special Edition (特別版, Tokubetsuban) book, typically come with bonus content, such as the DX toys, character photobook, or figures.

With the premiere of Kamen Rider Zi-O in 2018 celebrating the 20th series of Heisei, Televi-Kun announced the Heisei Kamen Rider Chozenshu Boxes (平成仮面ライダー超全集ＢＯＸ, Heisei Kamen RaidāChōzenshū Bokkusu) project, in which re-releases previous books, and releasing new books including OOO, Den-O and Hibiki.[1]. Additionally, all of the books will shares the same style cover page: Showing Riders' close-up face, with the series logo placed in the up right corner of the image, and the Heisei Kamen Rider 20th Anniversary logo placed in the bottom right right corner of the image.

The preorder opens on September 1, 2018, and released in February 2019. Except for OOO, other books are re-released version of previous books. 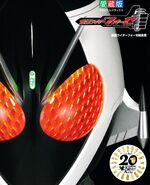 Fourze
Add a photo to this gallery

Retrieved from "https://kamenrider.fandom.com/wiki/Chozenshu?oldid=543099"
Community content is available under CC-BY-SA unless otherwise noted.