MetsubouJinrai.net
ZAIA Enterprise Japan
ZAIA Enterprise (ZAIAエンタープライズ, ZAIA Entāpuraizu) is a multinational technology conglomerate with offices based around the world.

They were founded at some point and opened a branch in Japan, with Gai Amatsu serving as its CEO. The Japanese office is the main benefactor for A.I.M.S. and is responsible alongiside Hiden Intelligence for the creation of Daybreak Town [The Bus Guide Saw It! Anna's Truth]. It was shown that ZAIA Enterprise already has various branches throughout the world. [It Is I, the President and a Kamen Rider] 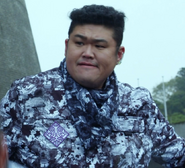 ZAIA Enterprise already has various branches throughout the world.

The word "ZAIA" comes from the Greek meaning "Life". When the name "ZAIA" is put together with the name of the Ark, it sounds like the Japanese word for "sins" (罪悪, Zaiaku), hinting at ZAIA Enterprise's machinations behind the Ark turning to evil.