The Time Jackers (タイムジャッカー, Taimu Jakkā) are a group of individuals who seek to alter history by creating monsters known as Another Riders. There are Time Jackers throughout the multiverse, with Swartz being the most infamous one as he attempted to take the throne from Ohma Zi-O and become king himself.

In other timelines (and alternate universes), Tid, Spade and Finis executed their own agendas while staying unaffiliated with Swartz.

There are Time Jackers throughout space and time. In the World of Swartz, the group was founded by Swartz, a member of a royal family capable of manipulating time. However because his younger sister Alpina was chosen to succeed the throne over Swartz, he became jealous and abandoned his younger sister in Ohma Zi-O's timeline in an effort to take kingship for himself. Swartz then traveled to different periods in time, recruiting Heure and Ora to carry out his orders and fully founding the Time Jackers in his space-time. They travel to different years within the Heisei era of Japan and turn several people in Another Riders, coming into conflict with Sougo Tokiwa, a young man blessed with the makings of a king, and Swartz's true target.

However their activities had caught the attention of Tsukasa Kadoya, who then traveled to their world to prevent them from fully altering the timeline. After disbanding the Time Jackers and stripping Ora and Heure of their powers, Swartz steals Tsukasa's powers and becomes Another Decade himself.

As Ora and Heure are misguided and eventually taken in by Sougo, the two ultimately meet their demise as her Swartz's plans. Fully armed with the power of Ohma Zi-O, Sougo and Swartz engage in their final showdown, with Sougo coming out on top. Sougo then chooses to reset time, placing Ora and Heure as high school students, with Swartz becoming a teacher.

Sometime in the future, Tid became a Time Jacker and travelled to 2000 while kidnapping Shingo, a Singularity Point, as part of his bid to end the history of the Heisei Riders. Kamen Rider Heisei Generations FOREVER

Sometime in the future, Finis became a Time Jacker and traveled to the past to prevent the Daybreak Town Accident from happening. By doing so, she created Another Zero-One and severely altered the timeline. Kamen Rider: Reiwa The First Generation

Ora (defected)
Add a photo to this gallery

Finis (Reiwa The First Generation)
Add a photo to this gallery 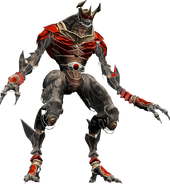