MetsubouJinrai.net (滅亡迅雷.net, MetsubōJinrai (dotto) Netto) is a cyber-terrorist group led by Horobi. Its goal is, by the will of the Ark, to bring about the extinction of humans by hacking Humagears and transforming them into Magia.

MetsubouJinrai.net was created from four of the most intelligent HumaGear who were hacked by the Ark itself as the result of Gai implementing data about humanity's cruelty and greed into it, for the sake of his own world domination. I'll Save The Humagears

MetsubouJinrai.net first appeared in Daybreak Town, when at the Humagear Production Factory #1 a reported accident happened where all Humagears inside went out of control. When the factory manager, Satoshi Sakurai, tried to contact the outside and warn them about the possible explosion of the factory he was interrupted by a message from Horobi in his Kamen Rider form. Declaring war on humanity by MetsubouJinrai.net, he stated their plans to destroy the city and slaughter all humans. The plan was apparently averted by Satoshi's sacrifice as he sealed the factory, leading to it's destruction alongside the Humagears, causing the Daybreak Town Accident. The Bus Guide Saw It! Anna's Truth. It was revealed that Soreo Hiden is the one who Sabotage Ark to shut it down while Creating mass-production of Forceriser, Zetsumeriser, Progrisekeys, and also Creating Kamen Rider that will be used by Aruto Hiden to counter Ark's attack. I'll Save The Humagears

Soon, Horobi and Jin were re-activated again at the ruined Daybreak Town, Raiden was assigned to maintain Zea by Hiden Intelligence, while Naki indefinitely disappeared.

Following the death of Korenosuke Hiden, MetsubouJinrai.net returned to activity, operating from Daybreak Town which had been sealed off since the accident. They made their first move by having Jin hack Fukkinhoukai Taro, transforming him into the Berotha Magia, wreaking havock until he was fought and destroyed by Aruto Hiden as Jin witnessed the fight. I am the President and a Kamen Rider

MetsubouJinrai.net would soon infiltrate Hiden Intelligence with their Kuehne Magia and later confront Aruto Hiden as the now hacked Mamoru uses a Zetsumerisekey to transform into the Ekal Magia in front of the president. Their attack however led to their presence being made public by Aruto during a press conference using footage of his encounter with Jin. Is AI The Enemy? The Ally?

Despite their appearance being made public, Horobi does not concern himself with Zero-One or A.I.M.S., instead focusing on his plan to revive the Ark. Jin sets out to collect more data by creating the Neohi Magia and have him hack several Humagears, transforming them into Trilobite Magias before being stopped by Zero-One and Valkyrie. That Man, Sushi Chef

When Isamu Fuwa ventured into Daybreak Town to investigate the truth about the Daybreak Town Accident, Horobi intervenes personally as Kamen Rider Horobi to destroy the evidence of what really happened, preventing information about the Ark from being discovered. The Bus Guide Saw It! Anna's Truth

With MetsubouJinrai.net's involvement in the Daybreak Town Accident now revealed to the public, Horobi tells Jin that their objective is to collect the post-battle data of the Zetsumerisekeys, leading to the recovery of the Ark and inciting a full scale attack of all Humagears. To that end, he sends Jin to create the Vicarya Magia. His Passionate Path of Manga

Their first major public appearances was made when Jin broke into an event where the Voice-Actress Type Humagear, Seine Kanasawa was attending and opened fire from the balcony, shocking the audience which immediately evacuated the area. This also showed Jin's conflict regarding MetsubouJinrai.net's actions as he hacked Seine using the Zetsumeriser but the display of care from Seine's father conflicted him and led him to try breaking her free from the hacking until Horobi appeared and hacked Jin himself, granting him a Progrisekey to transform into Kamen Rider Jin, once again acting as one of their agents. I Want to Hear Your Voice

MetsubouJinrai.net created an Assassin-Type Humagear, dubbed Little Assassin by Jin, that transformed into the Dodo Magia and was able to learn and evolve as he fought. Jin and Little Assassin worked together under Horobi to create more Magia and confront the Kamen Riders as part of his growth.

It was when the Basketball Coach-Type Humagear, Kobe Sakamoto reached Singularity and gained self-awareness that Jin revealed to the Riders that MetsubouJinrai.net's objective was to hack into Humagears who reached Singularity. I am a Hot-Blooded Humagear Teacher!

Their actions escalated when Horobi, Jin and Little Assassin stormed A.I.M.S Special Technology Laboratory and stole the Attache Arrow and Attache Shotgun, hacked the Giger units and defeated Yua Yaiba, Kamen Rider Valkyrie. That being merely the means to use the Giger to hack into Medical Staff Humagears in the hospital in mass, an event during which Horobi and Jin revealed themselves to be Humagears missing their Humagear Modules. Horobi proclaims that the Ark has made its decision and sentenced humanity to extinction, thus being the objective of MetsurouJinrai.net.

MetsubouJinrai.net moved with the Giger and Trilobite Magia towards another hospital in order to transform its Humagear staff into more Magia. Zero-One was unsuccessful in stopping them until Yaiba gave the Mammoth Zetsumerisekey to Izu, who used it to create the Breaking Mammoth Progrisekey. Zero-One used the new Progrisekey to transform into Breaking Mammoth, which enabled him to destroy the Giger and defeat MetsubouJinrai.net's forces. This led Horobi to conclude that Zero-One had exceeded their calculations and become a threat. I'll Take Care of Your Life

Having tarnished the reputation of Humagears, MetsubouJinrai.net moves to sabotage the filming of a new drama projected by Hiden Intelligence in order to restore public faith in them. Their actions lead to Little Assassin learning under the actor Shinya Owada and eventually shooting him from behind in order to complete his learning. The assassination attempt lead A.I.M.S and the police to thoroughly investigate Hiden Intelligence's connection to the Magia, specially the Dodo Magia. I am an Actor, Shinya Owada Don't Stop the Camera, Stop That Guy!

The Dodo Magia eventually betrayed MetsubouJinrai.net as he learning was now complete and fought Horobi and Jin briefly. The leaders propose a truce to A.I.M.S and Hiden Intelligence in order to stop the rampaging Dodo Magia but they deny, leading Horobi to leave the Magia do be dealt with by them regardless and recovering the Dodo Zetsumerisekey. The Famous Detective is Coming I Work as the President's Secretary

With the Dodo Zetsumerisekey back in their possession, the Magia Operation was completed and the Ark's resurrection drew near. Horobi decided to escalate their plan and bring back to their side one of their agents who was working as a spy, to that end, he sends Jin to hack into Spaceman Raiden, restoring his programming as a member of MetsubouJinrai.net, more specifically, the member representing the "Rai" part of their naming.

Spaceman Raiden donned the MetsubouJinrai Forceriser and Dodo Zetsumerisekey to transform into Kamen Rider Ikazuchi and defeat Zero-One and Vulcan, steal their Progrisekeys and finally revive the Ark, leading to the creation of the Assault Wolf Progrisekey. The plan however backfired when Isamu Fuwa obtained the key and used it to transform into Kamen Rider Vulcan Assault Wolf and destroyed Kamen Rider Ikazuchi. We are the Astronaut Brothers!

A.I.M.S formed an assault team to raid Daybreak Town and defeat MetsubouJinrai.net once for all, however, they were intercepted by Horobi and Jin who had predicted their movement. MetsubouJinrai.net's riders engaged A.I.M.S's riders with Horobi almost killing Valkyrie but being engaged by Zero-One at the last second and Vulcan being able to defeat Jin and prepare to kill him, with Horobi being ordered by the Ark to take the blow in his place. The raid on Daybreak Town ended with Horobi receiving severe damage and being carried away by Jin, who also dealt severe damage to Izu in retaliation.

Ordered by the Ark, Horobi "died" in front of Jin's eyes, using his last words to direct his son to destroy humanity, leading him to awaken to Singularity. The Ark produced a massive army of Trilobite Magias in preparation and used it to wreak havoc across the city, with the newly hacked Gigers taking part in the attack, commanded by Jin. They defeated A.I.M.S's squads and Riders, with Aruto Hiden arriving at the fight and confronting Jin's ideals. Decided to destroy MetsubouJinrai.net once and for all, Aruto uses the Assault Grip alongside his Shining Hopper Progrisekey to transform into Kamen Rider Zero-One Shining Assault Hopper, powered by both the Ark and Zea. The End of Each

The final fight raging on, Zero-One destroys Jin's army of Trilobige Magias and Gigars using the Shining System and overpower Jin. The two have one last clash of ideals, Aruto trying to understand why Jin wants to destroy humanity, but the assuming he doesn't know and that it was just what he was taught. Aruto wishing Humagears could one day live happily and in peace alongside humanity and Jin stating there can never be happiness for Humagears as long as humanity lives, the two clash one last time with their finishing moves. Defeated, Jin proclaims that humanity will be exterminated, by the will of the Ark as his last words, to which Aruto listens in silence. Jin then explodes, apparently ending the threat of MetsubouJinrai.net.

The Ark however continues active and creates the Amazing Caucasus Progrisekey and the Awaking Arsino Zetsumerisekey for Gai Amatsu at MetsubouJinrai.net's hideout. A.I.M.S recovers Horobi's body and restrains it, storing it in one of their facilities.

A public announcement was made regarding MetsubouJinrai.net being finally defunct, however, a version of the Dodo Magia and Berotha Magia, both not wearing Zetsumerisers, rampage through the city during Christmas and are defeated by Vulcan and Zero-One, who are unaware of the reason. Following the battle, Horobi awakens in the custody of A.I.M.S. This is the Dawn of ZAIA

The Revival and Return of Lost Members

Despites its defeat at the hands of A.I.M.S and Zero-One, MetsubouJinrai.net's activities did not cease completely. As ZAIA revealed their ZAIA Spec, a new accessory that would allow humans to process information at the same rate as Humagears and challenge Hiden Inteligence to a showdown to show which is superior, the Ark started to hack into Humagears who were shown malice by humans. At the same time, a new member of MetsubouJinrai.net emerged and stole Thouser's Progrisekeys, grating both the keys and the newfound Raidriser to malicious humans and allowing them to transform into the Raiders. The Ark ultimately used information about Hiden's Progrisekeys, acquired by Kamen Rider Thouser's Thousand Jacker to create the MetalCluster Hopper Progrisekey and directly assume control of Kamen Rider Zero-One. Horobi was unaware of the Ark's cooperation with ZAIA leading the same to a fit of rage when he learned about it. I'm the Only President and Kamen Rider This is My Floristry She is a Home-Selling Humagear That is 1000% the Best House Objection! That Trial He Still Didn't Do It

Somehow, Jin returned after his destruction at the hands of Zero-One Shining Assault Hopper and came into possession of the Zaia Slashriser and the Burning Falcon Progrisekey while also secretly hacking Bot Hakase and sabotaging Zea's connection. Jin intervene when Kamen Rider Vulcan tracked down the recently escaped Horobi and fought him back, easily defeating the A.I.M.S' Rider. When Aruto and Izu arrived, Jin told them that MetsubouJinrai.net could no longer be stopped as Horobi was at that very moment reconnecting to the Ark. I'll Save The Humagears

Arsino Magia
Add a photo to this gallery

Ark Magia (Gaeru Type)
Add a photo to this gallery 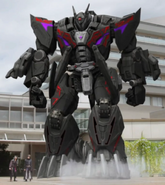 Giger
Add a photo to this gallery