Kamen Rider Wiki
Register
Don't have an account?
Sign In
Advertisement
in: Kamen Rider Agito, All articles with unsourced statements, Monsters,
and 2 more

The Lords are a group of powerful disciples serving under the Overlord, who created them from his body. Referred by the police department as the Unknown (アンノウン, An'nōn), to differ them from the Unidentified Lifeforms that attacked humanity two years ago. According to books and mini-encyclopedias about Kamen Rider Agito, the Lords are actually of the Rinto (リント, Rinto) tribe that battled the Gurongi in the past before Kuuga defeated them, thus linking the Lords to the Rinto as humanity's protectors. [Citation needed]

All Lords are anthropomorphic animals displaying human-like qualities and bodily features, with the head of the animal whose tribe they belong to. All of them have a wing-shaped protuberance sticking out of their shoulder, possibly referencing their existence as either angels or holy messengers as they target survivors of the Akatsuki incident. Those that survived the Akatsuki and other humans unrelated to the events prior possess a form of psychic power that marks them as having the potential to become Agito. When they murder psionicists/potential Agitos, they commit a ritual by using their hands, saying that they want permission to sin. At the same time, a halo would appear over their heads. Each Lord has their unique way of murdering, for example: leaving the corpse in a tree, dissolving the human, taking the water out of the human, changing the human into sand, placing the human many feet underground, dragging the human into the air and dropping them, vaporizing, etc. Killing a normal human is considered a taboo with a penalty of death. Over the course of the Agito's episode airings, the Lords do this hand gesture ritual 25 times.

When a Lord is killed, the halo normally materializes over their heads before they explode.

The Overlord (オーヴァーロード, Ōbārōdo) is the highest power among the Unknown, and is referred to as the creator of the human race. Long ago, there existed twin entities of the Rinto Tribe; one being the embodiment of light while the Overlord was embodiment of darkness. These twin 'brothers' co-existed in harmony for a time, eventually creating our world. However, neither could agree on who would reign over their creation and a battle for control took place. In the end, 'Darkness' triumphed over 'Light'. But with his dying breath, Light bestowed his essence upon humanity--the power of Agito--with the hopes that, one day, they would evolve beyond his brother's control. But the Overlord refused to let this occur, taking it upon himself to personally eliminate the vessels of Agito, creating the Lords to kill all humans who possess the potential to "evolve" into Agito.

Though he died around the Pleistocene, the Overlord left a puzzle that held a model of his very own DNA. Once the puzzle was solved, the Overlord's DNA was reconstructed from scratch. This allowed him to reform his physical body, starting off as an infant as he broke out of the containment box and escaped from the O-Parts lab. However, his birth was witnessed by Sakiko Mikumo, following her after he matured to an eight-year-old boy until she was killed by Anguis Femineus, whom the Overlord punished. Encountering Ryō as he was near death, the Overlord used his power to prolong his life, assuming his adult form as a result. After forced to take his leave after being nearly killed by a fear-driven Gills, the Overlord took it upon himself to personally murder Tomoko Miura, getting arrested and placed in a mental ward after he shut down from the burden of personally killing a human. As a result, the Overlord decided to watch from the sidelines as the Lords committed various supernatural murders on anyone reaching paranormal maturity, with the Agito Shōichi, along with Ryō and Makoto Hikawa, further complicating matters and interfering in his emissaries' work.

Before long, casualties mounted on both sides, with psionicists/potential Agitos and Lords alike suffering losses. But when the El of the Sea was defeated, it opened the the Overlord's eyes to the reality that the vessels of Agito, Shōichi Tsugami, Ryō Ashihara, and Kaoru Kino had grown too powerful. To this end, he would see to it personally that all Agito vessels were hunted down and stripped of their Seeds of Agito. One by one, the Overlord claimed one Seed after another, until all three were rendered powerless--human. However, the Overlord realized he needs to kill the Riders in order to quell the Seeds as they limited his power and kept resisting him. With Hikawa's aid, Shōichi dealt a decisive blow to the Overlord that released the Seeds of Agito back to their rightful owners and forced the Overlord to retreat. However, that shock that even normal humans had grown strong enough to oppose his power convinced the Overlord that humanity was no longer worthy of existence, and so they began orchestrating extermination and a plan to start anew.

The Overlord would put his genocide of humanity into action through the realigning of the Scorpio constellations, ultimately killing off all of mankind in bizarre doppelgänger homicides starting with those born under the Scorpio Zodiac month. To do this requires tremendous concentration, which would render him vulnerable. To this end, he creates the El of the Wind to be his bodyguard and the El of the Ground to continue killing those reaching maturity to become an Agito. After destroying the El bodyguards, the Riders make one final stand against the Overlord who is defeated by Agito's Shining Rider Kick. The Overlord survived the fatal attack and decides to postpone his plans to wait and see what the future holds for humanity.

The Lords also exist in the A.R. World of Agito, where they are fought by the police department's Kamen Rider G3, an alternate Kamen Rider Exceed Gills, then the perfected Kamen Rider Agito, Shoichi Ashikawa. They target any humans with abilities above normal or any threat to humanity, deeming themselves as humanity's holy protectors. 「Reunion: Project Agito」 「Awakening: Tornado of Souls」

As one of the races of the Nine Worlds, the Lords are part of the Dai-Shocker alliance, a coalition of all villain organizations fought by the Kamen Riders, who have ambitions to conquer the multiverse. It is not clear why the Lords joined Dai-Shocker, as they think themselves as humanity's holy protectors.

The Lords Leiurus Acutia, Formica Pedes, Formica Regia, as well as Taurus Ballista from the World of Agito, were part of the Dai-Shocker army that was fought and wiped out by a gathering of 25 Kamen Riders in the World of Decade after Dai-Shocker started their invasion of the worlds. 「Kamen Rider Decade: All Riders vs. Dai-Shocker」

The Lord Propheta Cruentus was among the Dai-Shocker members who appeared in the World of Amazon. He was destroyed by Kuuga Titan Form's Calamity Titan attack. 「Amazon, Friend」「The Strong, Naked, Strong Guy」

The Lord Volucris Falco was a member of the Dai-Shocker remnant, Super Shocker, that appeared in the World of the Rider War. 「Kamen Rider × Kamen Rider W & Decade: Movie War 2010」

The Lords, represented by El of the Water, were among the various evil organizations and monster races which were allied with Shocker in an alternate timeline where they conquered the world thanks to the Shocker Greeed. Pantheras Luteus and Cetos Orcinus were among Shocker's army of monsters. When all the Kamen Riders came back in 2011, Agito returned and defeated the Lords allied with Shocker. 「OOO, Den-O, All Riders: Let's Go Kamen Riders」

Several Lords - Pantheras Luteus, Stellio Dextera, and Taurus Ballista - under El of the Ground were part of the revived Dai-Shocker assembled by Decade to wipe out the Super Sentai, ensuring the survival of the Kamen Riders. After Dai-Shocker's alliance with Dai-Zangyack was revealed, both organizations were wiped out by a gathering of Kamen Riders and Super Sentai. 「Kamen Rider × Super Sentai: Super Hero Taisen」

The souls of defeated Lords, among the other monster races fought by the Kamen Riders, surfaced in the world within the Magic Stone which was ruled by the evil wizard Amadum. Amadum's army of monsters were fought and destroyed by the 15 Heisei Riders when they were summoned to this world. 「The Kamen Rider Rings」 「Neverending Story」

Under the Overlord exists three very powerful Lords, known as the El Lords (エルロード, Eru Rōdo). They normally reside with their master's body until summoned, possessing the ability of speech.

El of the Water

El of the Water (Strengthen Form)

El of the Wind

El of the Ground

El of the Ground (Strengthen Form)

Jaguar Lords (ジャガーロード, Jagā Rōdo): Lords based on big cats of the Panthera genus. They killed their victims with a snap of the neck before leaving the corpse on a tree.

Tortoise Lords (トータスロード, Tōtasu Rōdo): Able to swim through the ground like fish in water, their method of killing is to pull the human in the ground, burying them alive with no sign of the soil disturbed in the process.

Snake Lords (スネークロード, Sunēku Rōdo): Able to move at blurring speeds across short distances. By making and holding their hand ceremony, they can make a blast of wind gust from behind them. Their method of killing is opening a portal to suck their victims in, which teleports and drops them from high in the sky, letting gravity do the work for them.

Crow Lords (クロウロード, Kurō Rōdo): Able to move as fast as jet-planes in the air, they use aerial-themed deaths from fatal dive-bomb charges to dragging a human into the air and dropping him.

Zebra Lords (ゼブラロード, Zebura Rōdo) use a form of rapid decay as their killing mechanism, using it on normal humans who interfere.

Jackal Lords (ジャッカルロード, Jakkaru Rōdo): Able to move at fast speeds, they use their talent to kill people. 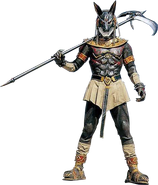 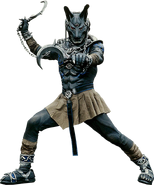 Hydrozoa Lords (ハイドロゾアロード, Haidorozoa Rōdo): Their method of killing is striking their victims with a bolt of lightning, causing them to die via spontaneous human combustion. 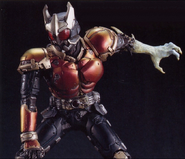 Bee Lords (ビーロード, Bī Rōdo): Their method of killing is grabbing a person and use a form of matter transference to bury the victim alive in a honeycomb-inized wall.

Stingray Lords (スティングレイロード, Sutingurei Rōdo): The method of killing is having a person fall to his/her death via matter transference, such as letting them phase through every floor of a tall building before hitting the ground.

Fish Lords (フィッシュロード, Fisshu Rōdo): Their method of killing is giving their victim a death that seems to look like Diver's Sickness.

Lizard Lords (リザードロード, Rizādo Rōdo): Their method of killing is using an acid mist to suffocate the victim, with the lifeless body dissolving into foam.

Lords based on Birds of Prey, their method of killing is cracking the skulls of their victims.

Ant Lords (アントロード, Anto Rōdo): A species of Lords exclusive to the movie, their method of death is spraying a suffocation-induced liquid in their victim's face. The Ant Lords are rarely used, due to them being able to override the Lords' taboo and kill normal humans. 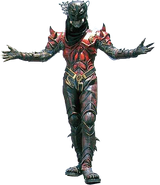 Lords that are the sole known members of their respective species.

The Lords appear with the Gurongi in Kamen Rider Agito & Kuuga Wild Battle. Three Jaguar Lords, Luteus, Albus, and Tristis, are playable in the Fighting, Training, and Survival Modes.