Man of the Beginning

The Inves (インベス, Inbesu) are a race of monsters who act as one of the antagonists of Kamen Rider Gaim.

The Inves are strange monsters that are thought to only exist within the newly popular Inves Games, which involves Lockseeds. They are eventually revealed to be actual monstrous animals that can travel to and from an alternate dimension known as the Helheim Forest to wreak havoc on Zawame. The standard variant of Inves is known as a Elementary Inves, a form humans are familiar with as the forms the Inves take while in a Inves Game.

However, the Inves can also take on a stronger form, which is then called a Advanced Inves, and only a Kamen Rider has the power to put a Advanced Inves down. An Inves' evolution into its Advanced state is triggered by eating a mature Lockseed.

When the Inves in its Advanced state consumes another mature Lockseed, be it the one that summoned them or a completely different Lockseed, such as when the Shika Inves ate Gaim's Ichigo Lockseed, they will evolve into higher form called a Strengthened Form (強化体, Kyōka-tai). If an Elementary Inves consumes a multitude of Lockseeds, than it is capable of bypassing its Advanced form and evolve straight into its Strengthened Form.

The Inves also carry within their bodies a virus. If an Inves can break the skin of a human being in an attack, the victims will have the plants from Helheim sprout from their wounds, causing intense pain, and likely mutating them into Inves. The Inves seem to be aware of the virus, as well as how to control it, such as when the Inves first started to attack people, no one was affected. However, the Inves only seem to affect people and inanimate objects when they are in need of immature Lockseeds to feed on.

There are also Inves created from humans that ate the mysterious fruits and are labeled by the Yggdrasill Corporation as Category H Inves. Yggdrasill considers such Inves to be nothing more than corpses animated and controlled by the forest's instinct. Although a Category H Inves may be able to retain some semblance of their human form, they are little more than mindless creatures acting the basic instinct to feed. For some reason, these Category H Inves do not infect people with the pathogen that causes Helheim's fruits to grow from their wounds.

An ordinary Inves are ruled by an Over Lord Inves, a highly intelligent Inves that is far more superior than humans, and are the masterminds behind the outbreak and rulers of the Helheim Forest. Unlike an ordinary Inves, the Over Lord Inves does have a human-like level of intellect, allowing them to speak, albeit in a strange language. However, they soon learn the Japanese language.

An indeterminable amount of time ago, the Helheim Forest appeared to the old Femushinmu civilization, ruled by Rosyuo. Influenced by the mysterious Forest, Rosyuo attempted to change his civilization into a society ruled by survival of the fittest, which resulted in the destruction of his civilization save the few strong enough to adapt. Ultimately horrified by what his actions had caused, Rosyuo was left as King of a ruined world, left with a people who lived only to feed off of the Helheim fruits. Though through Helheim he had achieved the all-powerful Forbidden Fruit, it was useless to Rosyuo, who had only wished to be reunited with his deceased wife.

Now a part of the Helheim Forest itself, the Inves species was brought to Earth when it became the newest target of the mysterious entity. Seeking to push humanity to evolve, the Helheim Forest began slowly tearing into Earth's dimensional fabric, creating minor holes, which eventually became known as "Cracks", to allow the Inves to invade the new world. The largest concentration of Inves invasions were located in a small rural town in Japan.

Discovering the Helheim invasions and convinced of an inevitable impending doom to humanity, the Yggdrasill Corporation established Zawame City in Japan, turning the small rural town into a bustling Metropolis made to act as testing grounds to study the Inves invasions. As a result of youth culture in Zawame, street dancing became a quickly growing hobby, which ultimately resulted in turf wars between Zawame's teenagers. Seeing these youths as potential lab rats, the Yggdrasill Corporation organized the Inves Games as a means of field testing the mysterious Lockseeds developed from Helheim's fruits, as well as studying the Inves summoned to do battle through the Inves games. With Yggdrasill distributing Lockseeds by way of secret deals, Zawame's citizens were able to purchase Lockseeds and seemingly use the Inves for battles over territory against other street dancers.

Rise of the Over Lords

The first Over Lord Inves to appear on Earth was Tyrant. Having used a Genesis Driver with a prototype Dragon Fruits Energy Lockseed, provided by Professor Ryoma Sengoku, to assume the form of a New Generation Rider, Alfred soon became Tyrant when he sucuumbed to the power of Helheim housed in the Lockseed. Having made an enemy of Armored Rider Baron through his attempted murder of Shapool, it was in this form that Alfred was slain by Kaito Kumon using the Ringo Lockseed, which itself threatened to contaminate him with the essence of Helheim. Following the duel, however, Kaito, destroyed the Ringo Lockseed before it could continue to affect him. Gaim Gaiden: Kamen Rider Baron

A single Lion Inves appeared in the midst of an infiltration of Zawame by the Underground Empire Badan, though its appearance was unintentional on Mogura-Roid's part of accidentally digging up Cracks twice, each time summoning that same Lion Inves. After eating some Helheim's Fruits while being attacked by the ToQgers, the Lion Inves grew to gigantic proportions

while assuming its Armor Evolution form, leading to it being destroyed by the ToQgers' ToQ-Oh Car Carrier Tank

A single Yagi Inves appeared in Zawame and started attacking people before being driven off by Gaim and Jiro. The Inves later fought with Hakaider, controlled by Ryoma Sengoku, against Gaim Kachidoki Arms and Kikaider, but it was a destroyed by a combined finisher from the two after Hakaider fled. The Red and Blue Kikaider

Following his evolution into an Over Lord Inves, Baron possessed the ability to rally numerous lesser Inves to his side. Indeed, a Lion Inves and a Yagi Inves appeared to worship him as he announced before the Armored Riders that he would destroy the world and remake it in his image. The two Inves, along with Malika, helped put down Bravo and Gridon when they opposed him. Two People Aiming At the Future

After Kouta became the new Man of the Beginning, he sent all of the Inves to a distant planet named Planet of Helheim, making peaceful lives without harm human lives in any way. Fate's Victor

Through data absorbed from Kouta Kazuraba as Man of the Beginning, ZZZ Megahex created a force of Mecha Inves, mechanical recreations of the Elementary Inves. They are all destroyed alongside the Plain Roidmudes (Lost Number) by Kamen Riders Drive and Gaim with help from the other Armored Riders and Roidmude generals. Kamen Rider × Kamen Rider Drive & Gaim: Movie War Full Throttle

In an alternate timeline created by Shocker's History Modifying Machine enacting an assassination of the Double Riders by Kamen Rider 3 in 1973, at least one Over Lord Inves, Demushu, was among the many monsters that served the evil organization which ruled the world in this timeline. During the final battle against the Kamen Riders, Demushu was destroyed by the unbrainwashed former Shocker Rider, Gaim. Super Hero Taisen GP: Kamen Rider 3

Kaito Kumon was brought back by Frey as an opponent in order for the current Kamen Riders to unlock Kamen Rider Gaim's Ghost Eyecon, a feat which was achieved by Kamen Rider Ghost who used it to assume Gaim Damashii and destroy Lord Baron again. Kamen Rider Ghost: Legendary! Riders' Souls!

An iteration of Redyue was among the Shocker army of the Game World led by Shocker Leader III, the boss of the Chou Shocker Taisen bonus stage. This army was ultimately wiped out by a combined force of Kamen Riders and Sentai Rangers

As a result of the Time Jacker Swartz transforming Team Baron member Asura into Another Gaim, the Kouta Kazuraba of that timeframe lost his power as Armored Rider Gaim as it was erased from history in the midst of a battle with a pair of Elementary Inves. The Inves, however, survived the temporal disturbance unlike the other adversaries of the past Heisei Riders. Indeed, they continued to roam in the Helheim Forest as late as November 2018, menacing the members of Team Baron that Asura had banished to Helheim over the past five years.

On November 18, Geiz Myoukouin, who had been banished to Helheim, found two Elementary Inves attacking a Team Baron member. Transforming into Kamen Rider, Geiz quickly destroyed the pair of Inves with a series of strikes from his weapon, the Zikan Zax. Immediately after, having been alerted by Kaito Kumon, Geiz fired a blast to destroy a third Elementary Inves. Zi-O On Parade 2018

On August 11, due to the destruction of the Drive, Gaim, Build, and Double Ridewatches cause by the time distortions, the Sky Wall, Futo Tower, and the Yggdrasill Tower appeared in the city, along with Chase, Roidmudes, Dopants, and Inves attacking the city. 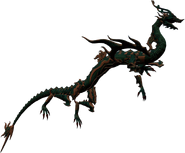 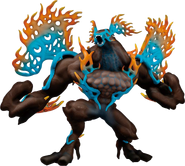 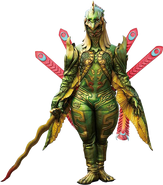 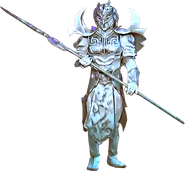 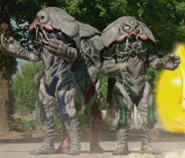