Kamen Rider Wiki
Register
Don't have an account?
Sign In
Advertisement
in: Kamen Rider Kuuga, All articles with unsourced statements, Villains,
and 3 more

This mysterious ancient civilization is made up of beings that can transform into monsters to kill people for their ruthless game (ゲーム, gēmu), which is translated into the Gurongi language as the "Gegel" (ゲゲル, Gegeru). Attacking their rival civilization the Rinto (リント, Rinto), the original Kuuga defeats the leader of the Gurongi and seals all 200 of the Gurongi tribesmen away.

The beings known as the Lords also protected the Rinto tribe. [Citation needed] However, by the present day, the newly resurrected Daguva revives his tribe from their rest and restart the Gegel on the human race, the descendants of the Rinto, to bring out the "Ultimate Darkness" (究極の闇, Kyūkyoku no Yami), where they commit genocide towards humanity.

They are referred by the Police as Unidentified Lifeforms (also known as "ULFs") (未確認生命体, Mikakunin Seimeitai). Each of them possesses a strange artifact called Geburon on the belt-like (the buckle is called Gedoruto) parts in all of their bodies, no different than Kuuga's Amadam. Gurongi seen in human form are labeled as "B" (Ｂ群, Bīgun), and each human-like Gurongi possesses a tattoo that resembles their true animalistic forms. Unidentified Lifeform #B1 appears in only human form for the entire series outside of a glimpse of her hand or so. Only 48 out of the original 200 Gurongi appeared in the course of Kuuga's broadcast, though some of them were fought offscreen between episodes, and the other 152 were killed off by Daguva after his return for being "unworthy".

The Gurongi has a three-part naming scheme that all members have, consisting of "Group-Species-Creature type". The first part of their names indicates their rank and which group that Gurongi belongs to; the second part is their personal name, which contains a reference to what animal/plant their Gurongi forms are based on; and the third part indicates what animal groups they belong to: "Ba" for insects and arachnids; "Da" for mammals; "De" for plants; "Gi" for fish and other aquatics animals; "Gu" for birds and other animals with wings; and "Re" for reptiles and amphibians. The leaders of the Gurongi Tribe will have a "Ze" in front of their animal group names. When talking with each other, they will usually address each other by only their personal names without either group designation. There are four groups shown on screen, namely Xu, Me, Go, and La. Xu, Me, and Go are the only groups allowed to enter the Gegel, while the La Group (namely Balva and Doldo) acts as their judges and the Nu Group crafted their belts and weapons.

A stage show introduces the Be Group as being the lowest-ranking and not allowed to join the Gegel at all. These groups are not permanent, as Me·Galme·Re was promoted up from the Xu Group during the series. Xu is the first group to start the Gegel with Xu·Gmun·Ba as the first player and Xu·Zain·Da as their leader. The Xu Group is assigned a number of humans to kill and tallies them on a Guzepa bracelet. After all the Xu Group were defeated by Kuuga, the Gegel is continued by Me Group led by Me·Garima·Ba and with Me·Vagis·Ba as the first player. Me Group members also use a Guseba but decide their victim number themselves. Later, the Go Group enter the Gegel with Go·Buuro·Gu as the first player and Go·Gadol·Ba as the leader. The Go decide upon a unique pattern for choosing victims, while Doldo tallies their victims for them. Each group has different rules and methods for killing people. The Xu relies on their physical strengths and abilities, such as Xu·Zain·Da using his brute strength to kill truck drivers and Xu·Mevio·Da's immense speed. The Me use built-in weapons such as Me·Geega·Gi's ink bombs, and Me·Vagis·Ba's wrist-mounted stinger gun. The Go Group is the strongest and is able to create weapons from objects they grasp, much like Kuuga. The first player was Go·Buuro·Gu, and their leader is Go·Gadol·Ba, also the leader of the elite Gevagel subgroup of the three most potent Go Group members, who are also capable of changing forms to match Kuuga's.

In the S.I.C. Hero Saga story for Kuuga, it was revealed the Gurongi were once humans, much like the Rinto. They had found a meteorite with strong yet strange crystal-like objects, which allowed to them easily defeat other neighboring tribes and countries by assimilating said crystal into their body and genes of various animals, plants, insects, or fungus that eventually turned them into monsters as they are now.

The etymology of Linto is not certain, but a Korean Kuuga fan blog postulates that it is derived from Japan (Nihon) along with the etymology of Gurongi.

The Gurongi Tribe also exists in the A.R. World of Kuuga, where they are fought by an alternate Kamen Rider Kuuga named Yuusuke Onodera. Instead of the regular Gegel, they take part in a Sacred Gegel to revive their leader, N·Gamio·Zeda, by killing female warriors (police officers) a certain distance from the mountain where Gamio lies without spilling a drop of blood. [Rider War (episode)] [The World of Kuuga] [Transcendence]

The A.R. World of Agito, which has several similarities with the World of Kuuga, has its own members of the Gurongi Tribe. However, they are practically replaced by the surfacing of the Lords, who attack the Gurongi as readily as they do Agito. [Reunion: Project Agito] [Awakening: Tornado of Souls]

As one of the races of the Nine Worlds, the Gurongi are part of the Dai-Shocker alliance, a coalition of all villain organizations fought by the Kamen Riders, who have ambitions to conquer the multiverse.

The Gurongi Xu·Mevio·Da, Me·Vagis·Ba, Me·Ginoga·De, and Go·Gadol·Ba, were part of the Dai-Shocker army that was fought and wiped out by a gathering of 25 Kamen Riders in the World of Decade after Dai-Shocker started their invasion of the worlds. [Kamen Rider Decade: All Riders vs. Dai-Shocker]

The Gurongi Go·Jalaji·Da was among the Dai-Shocker members who appeared in the World of Amazon. He was destroyed when Amazon used his Jaguar Shock on him. [Amazon, Friend]

The Gurongi Xu·Goma·Gu (Ultimate Form) and Go·Jalaji·Da were members of the Dai-Shocker remnant, Super Shocker, that appeared in the World of the Rider War. [Kamen Rider × Kamen Rider W & Decade: Movie War 2010]

The Gurongi, represented by N·Gamio·Zeda, were among the various evil organizations and monster races that were allied with Shocker in an alternate timeline where they conquered the world thanks to the Shocker Greeed. La·Doldo·Gu, Xu·Goma·Gu, Xu·Zain·Da, and Me·Garima·Ba were among Shocker's army of monsters. When all the Kamen Riders came back in 2011, Kuuga returned and defeated the Gurongi allied with Shocker. [OOO, Den-O, All Riders: Let's Go Kamen Riders]

Several Gurongi - Go·Jaaza·Gi, Go·Gadol·Ba, Go·Babel·Da, and Me·Garima·Ba - under N·Daguva·Zeba were part of the revived Dai-Shocker assembled by Decade to wipe out the Super Sentai, ensuring the survival of the Kamen Riders. After Dai-Shocker's alliance with Dai-Zangyack was revealed, both organizations were wiped out by a gathering of Kamen Riders and Super Sentai. [Kamen Rider × Super Sentai: Super Hero Taisen]

One revived Gurongi, Xu·Zain·Da, was a member of Space Shocker, an evil amalgamation organization similar to Dai-Shocker, which aimed to conquer the universe. It was actually a front for the revival of the Space Crime Syndicate Madou. [Kamen Rider × Super Sentai × Space Sheriff: Super Hero Taisen Z]

The World within the Magic Stone

The souls of defeated Gurongi, among the other monster races fought by the Kamen Riders, surfaced in the world within the Magic Stone which was ruled by the evil wizard Amadum. Amadum's army of monsters was fought and destroyed by the 15 Heisei Riders when they were summoned to this world. [The Kamen Rider Rings] [Neverending Story]

In an alternate timeline created by Shocker's History Modifying Machine enacting an assassination of the Double Riders by Kamen Rider 3 in 1973, at least one Gurongi, N·Gamio·Zeda, was among the many monsters that served the evil organization which ruled the world in this timeline. During the final battle against the Kamen Riders, N·Gamio·Zeda was destroyed by Kamen Rider Blade. [Super Hero Taisen GP: Kamen Rider 3]

The N Group are the most powerful of the Gurongi and serve as its leaders.

The La Group are the judges of the Gurongi game and Daguva's right-hand men.

The Go Group are high tier, weapon users whose weapons are created from each respected ornament much like Kuuga while in his Pegasus, Dragon, and Titan forms. Unlike the lesser tiers, the Go do not personally count their victims as La·Doldo·Gu does that for them as they judge. Also, their game roles are themed on personal rules they had placed on themselves, working on a certain number of people they picked personally. The Go who completes the Gegel, or the one who can defeat all the Go class Gurongi, earns the right to fight Daguva for control of the entire Gurongi Tribe. Their leader is Go·Gadol·Ba, one of the three strongest Go, the Gevagel, who modified themselves to alter their forms like Kuuga and Daguva.

The Xu Group contains lower-tier Gurongi. The creatures of the Xu Group which are not on the list are considered to have been murdered by Daguva, without acquiring the right of the game. The ones that are qualified are brought into the game by writing their names on a portable blackboard and using the beads of their bracelets to mark the number of people they have killed. Their leader is Xu·Zain·Da. 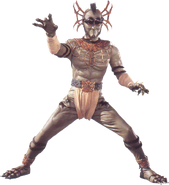 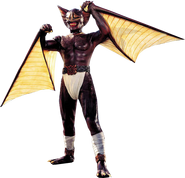 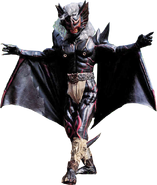 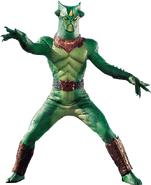 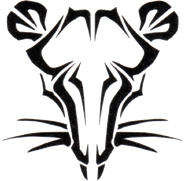 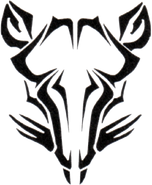 Middle tier, above the ranks of the Xu, they are brought into the game by using an abacus to predict the number of people they are to kill and the time period to accomplish that. Their leader is Me·Garima·Ba. 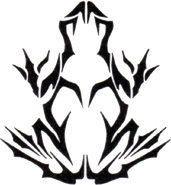 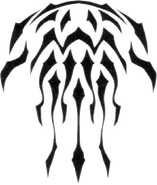 Gurongi whose groups are unknown. 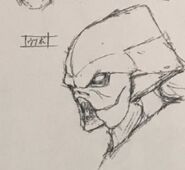 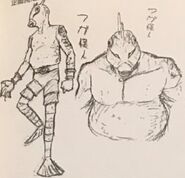 The Gurongi appear in the Kamen Rider Kuuga video game, fighting Kuuga who is controlled by the player. Several Gurongi is also playable.